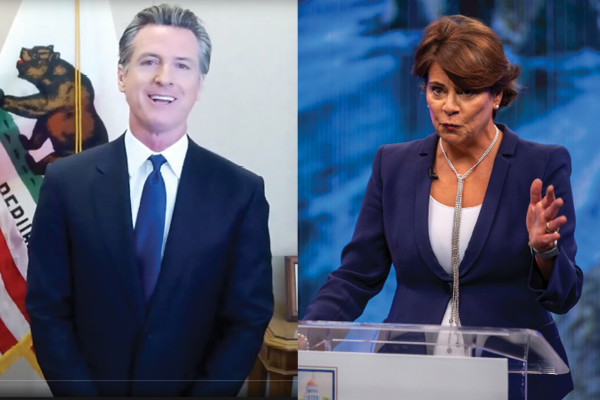 Small business was in the spotlight this year at the 95th Annual Virtual Sacramento Host Breakfast on May 13.

Governor Gavin Newsom, speaking to the virtual audience via Zoom from his office, announced his proposal to add $1.5 billion to the California Small Business COVID-19 Relief Grant Program. The added funding takes the program total to $4 billion, the largest in the nation.

CalChamber Chair Donna L. Lucas, preceding the Governor in the virtual presentation, emphasized that lawmakers need to hear the voices of small businesses and major employers.

“If more businesses successfully explain their essential role in fueling the California dream, there will be more creative thinking about fostering a business climate in which innovation, initiative, and entrepreneurship flourish,” she said.

Governor Newsom outlined his $100 billion California Comeback plan, a sum that combines the record $76 billion state budget surplus and about $27 billion coming to the state from the federal government.

He unveiled the plan in a series of stops up and down the state.

The Governor credited the small business community with making possible his plan’s ability to “reimagine, reinvigorate the California economy.”

Pointing at the camera, the Governor emphasized: “The fact that the State of California is roaring back is because of each and every one of you.”

It is “the resilience of small business men and women that create the jobs that are the real economic engine” of the state, the Governor said.

The Governor cited positive indicators for California including:

• February numbers showed California as accounting for 41% of U.S. jobs.

• The state has the lowest COVID-19 positivity rate in the nation. (The rate was 1% the day of the breakfast and as of May 20).

• Only five nations have administered more COVID-19 doses than California. (More than 35 million had been administered as of May 19.) If California continues at its current pace of doses delivered per day, the Governor said the state will move beyond the COVID-19 Blueprint.

The Governor thanked the California Chamber of Commerce and its Board of Directors for their partnership with businesses to address the issue of vaccine hesitancy.

In April, the CalChamber and other business groups launched a public service announcement (PSA) campaign encouraging Californians to get vaccinated when it’s their turn. The PSA aired statewide on TV, radio and social media, reaching millions of California residents in both English and Spanish.

The Governor moved on to an overview of the historic investments in his California Comeback plan (detailed in the May 14 special edition of CalChamber Alert) to deal with “stubborn and vexing” issues facing the state. The investments include:

• $1.5 billion to clean up and beautify highway onramps and exits, an effort to help the California Department of Transportation (Caltrans) that is estimated to create 15,500 jobs.

• $7 billion to convert hotels and motels to provide housing for the homeless.

• $5.2 billion to help renters pay off back-owed rent and reduce their anxiety.

•$5.1 billion to address drought, which has become a perennial concern. The Governor noted that the state has learned from the 2012–2016 drought and is advancing strategies to deal with the systemic issues on safe drinking water, conveyance, groundwater replenishment, recycling and more.

• “transformative investments” in public education, including universal pre-kindergarten and after school programs.

• adding $1.5 billion to enhance the small business grant program for a total of $4 billion.

• $250 million to help the state’s ports with their revenue losses and position them to be more competitive.

• nearly $100 million for Visit California to support marketing the California brand and help the hard-hit hospitality industry get back on its feet.

• funding to provide $10,000 seed grants for people to start businesses, regardless of their immigration status.

• an increase in the film tax credit.

The Governor touted California’s record venture capital investments compared to other states and its ranking as the No. 1 state for innovation on the Bloomberg index. When it comes to creative endeavors, such as the merger of technology and entertainment to spawn new forms of entertainment, “No one comes close to the State of California,” the Governor said.

In closing, the Governor emphasized his “deep pride in California” and confidence that the state would be “roaring back. That California dream — we’re going to make it alive and well for everyone. Growth and inclusion.”