The need for California to invest in infrastructure to continue advancing was a recurring theme in remarks by Governor Edmund G. Brown Jr. and California Chamber of Commerce Chair Terry MacRae at the 93rd Annual Sacramento Host Breakfast last week.

The May 24 breakfast attracted a record crowd of 1,400 and included a video tribute to the Governor and a video introduction for MacRae.

The Governor cited the investment, creation and engineering that went into building roads, bridges, trains, tunnels and schools that have made it possible for a space inhabited by 300,000 to support a state population of 40 million people today.

“California is not a pristine wilderness,” Governor Brown said. “It’s a highly engineered, highly sophisticated, advanced civilization that only continues if it continues that investment.”

MacRae pointed out that the state’s population has grown by almost 16 million people—the equivalent of the fifth largest state in the nation—in the 40 years since he started his business, Hornblower Cruises & Events.

“That type of growth puts additional demands on our infrastructure and it must be met,” MacRae said. “Today, we’re still playing infrastructure catch-up.” 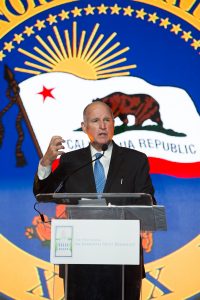 He acknowledged that “after more than two decades, with leadership from this Governor, the Legislature approved a transportation revenue plan to maintain and improve our road and highway network.”

The CalChamber supported the transportation funding plan (SB 1) and is opposing the upcoming initiative proposal to rescind the plan (see story).

The Governor reminded listeners that California is about $60 billion behind in deferred maintenance.

Thousands of projects are going to be funded by SB 1, he said. While Californians and Americans think of their state and country as world leaders, he cautioned, they should remember that China invests more than $1 trillion each year in infrastructure and an equal amount throughout the world.

“If America wants to be great, we have to invest in our future,” Governor Brown said. “Here in California, we’ve made the commitment.”

Government infrastructure projects over the years have been criticized, the Governor commented, citing as examples the Bay Area Rapid Transit System (BART), the State Water Project championed by his father, and the national freeway system launched by the Eisenhower administration.

“You in business create the products, the services,” he said, “but government creates the infrastructure. And when we work together, we make it what happened is what we have.”

Solutions to the state’s issues, MacRae said, “need constant updating to meet the needs of an ever-changing California.”

For example, he said, “with warmer temperatures of late, should we take our natural water reservoir, the Sierra snowpack, for granted, or anticipate the need for more reservoirs?”

Similarly, the growth of technology is a major economic driver today, “but do we recognize it may require different relationships with government—on education, on tax policy, on employment laws—in order to support their growth?”

He pointed out that when California had one-third fewer residents, it had twice as many new housing starts. “This has led inevitably and predictably to a housing affordability crisis,” he said. 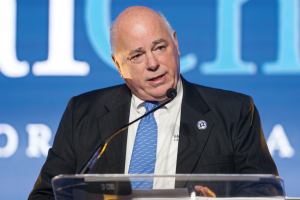 On tourism, MacRae offered three “takeaways” to the audience:

• Tourism is one of the foundations of the state’s economy and a major economic engine, “the rising tide that floats all ships.” It also is the state’s largest export; international visitors spend $25 billion every year in California, more than the value of the state’s annual agricultural exports.

• The state is fortunate to have Visit California, a public-private partnership, and “one of the strongest destination marketing organizations in the world,” to market the California brand around the globe. “It’s a competitive world for tourism dollars,” he observed, and the program needs continued support to drive this important part of the economy.

• While the tourism industry is strong, “it is not impervious to our neglect…All the marketing in the world won’t mitigate the permanent damage we do to the brand experience when we fail to provide clean, safe cities and the infrastructure necessary to visit.” The industry is not sustainable without affordable housing and transportation alternatives, plus an immigration reform package that includes work visa solutions.

The Governor repeated his caution about the cyclical nature of the state’s economy, reminding listeners that California has had 10 recessions since World War II with the longest recovery period lasting 10 years and the average being seven years.

Money flows into the state’s coffers just when the economy is on the edge of tilting over to recession, he said, emphasizing, “You gotta have reserves; you gotta have cash in the bank.”

The Governor pointed out that the state budget was $27 billion in the hole when he entered office, and he is leaving a $14 billion rainy day fund for his successor.

He added that he will leave to the next Governor the task of reforming the state’s tax system.

Both speakers closed with a call to work together.

“Let’s all commit to endorse and support those captains and shipmates of both business and government who clearly recognize that we cannot sustain our voyage independently or reach our destination separately as we are in the same boat,” said MacRae. “We’re all going to get there together or not get there at all.”

In dealing with the changing climate, including lengthy droughts, Governor Brown said, people have to be prepared to invest in the water system, storage, conveyance, recycling and desalination. “It all costs money and somehow we have to create a consensus,” the Governor said.

He commented that “the two parties have never been so far apart,” but voiced confidence at what could transpire if people “pull together.”

“We have created this amazing place called California, and it works because we’re all in it together.” 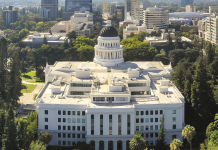