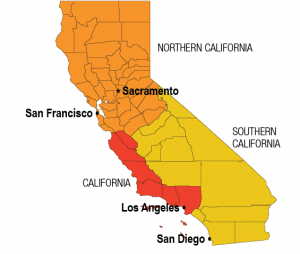 The California Chamber of Commerce Board of Directors has voted to oppose the three states initiative and the voter approval for increases in gas and car tax ballot measure. Both measures are expected to appear on the November general election ballot.

The CalChamber Board of Directors voted to oppose the Three New States Within the Current Boundaries of California initiative, which proposes to divide California into three states, subject to approval by Congress. The measure proposes that the three new states comprise:

• 40 northern and rural counties anchored by the San Francisco Bay Area, to be called Northern California;

• Six central coast counties, including Los Angeles, to be called California; and

No final dissolution between the existing state and its relationships with constituent counties will take place until the three new states formally establish their new governments, including their adopted constitutions.

The CalChamber Board voted to oppose this measure because a change of this magnitude is not appropriately the subject of a ballot measure. It should be considered either by the Legislature or by a constitutional revision commission.

Rather than seeking to solve the very real problems before California, this measure would instead create an entirely new suite of problems to distract and consume voters, political leaders, concerned citizens and ordinary residents.

The central challenge of governing in California is to reconcile the many and sometimes competing demands of a diverse population in a way that advances the overall welfare of the citizenry. This initiative declares that surrender to this test is a better option than rising to the challenge.

The CalChamber Board of Directors voted to oppose the Voter Approval for Increases in Gas and Car Tax measure, which would repeal all the transportation taxes adopted by the Legislature in 2017, including higher gasoline and diesel excise taxes, a new tax on vehicles, and a new tax on zero-emission vehicles.

The measure would also require any future legislatively imposed taxes on fuels and vehicles to take effect only upon a statewide vote of the people.

The Legislative Analyst estimates the measure would reduce spending on state and local transportation projects by nearly $5 billion annually.

The Board of Directors voted to oppose the measure because repealing the gas tax would:

• Make traffic congestion worse. California’s freeways and major thoroughfares are among the most congested in the nation, and Californians spend too much time stuck in traffic away from family and work. This measure would stop projects that will reduce traffic congestion.

• Cost drivers and taxpayers more money in the long run. The average driver spends $739 per year on front end alignments, body damage, shocks, tires and other repairs because of bad roads and bridges. Fixing a road costs eight times more than maintaining it. By delaying or stopping projects, this measure ultimately will increase costs for motorists.

• Hurt job creation and the state’s economy. Reliable transportation infrastructure is critical to get Californians to work, move goods and services to the market, and support the economy. This measure would eliminate more than 680,000 good-paying jobs and nearly $183 billion in economic growth that will be created fixing California roads over the next decade.

The Secretary of State has announced that the California Fair Pay and Employer Accountability Act qualified for the 2024 ballot on the random sample count of signatures. The initiative’s campaign submitted 962,217 signatures in...

A new website that provides updates and information on The California Fair Pay and Employer Accountability Act is now available at stoptheshakedown.com. (Website relocated to https://cafairpay.com/.) The California Chamber of Commerce strongly supports this proposed...

CalChamber Board Takes Positions on Initiatives Aiming for 2022 Ballot

The California Chamber of Commerce Board of Directors has voted to support two ballot measures and oppose two others that may go before voters in 2022. The CalChamber Board voted to: • Support the California Fair...