As the Biden-Harris administration and 117th Congress get to work, the California Chamber of Commerce is communicating its international trade priorities and support for working together to secure a national free trade agenda to federal officials.

Those officials include the newly sworn in Secretary of Commerce, in addition to California members of Congress.

The 40th U.S. Secretary of Commerce, Gina M. Raimondo, was sworn in on March 3 after a bipartisan Senate vote of 84-15. She will lead a key agency responsible for focusing on promoting economic growth.

A graduate of Harvard University and Yale Law School, Raimondo was a venture capitalist before entering public service. Most recently, she served as Governor of Rhode Island.

The confirmation of trade lawyer Katherine Tai as the U.S. Trade Representative, a Cabinet level position within the Executive Office of the President, was pending at publication time. She is a graduate of Yale University and Harvard Law School.

Fluent in Mandarin, Tai spent several years as the head of China enforcement at the Office of the U.S. Trade Representative. Most recently, Tai worked in the top trade staff position on the U.S. House Ways and Means Committee.

The CalChamber, in keeping with longstanding policy, supports expansion of international trade and investment, fair and equitable market access for California products abroad, and elimination of disincentives that impede the international competitiveness of California business.

Specifically, the CalChamber asks that:

• Trade be a priority.

• The revamp of the World Trade Organization address the functioning of the Appellate Body, and support efforts to ensure our trading partners adhere to fair and transparent trade practices while being held accountable when they violate international rules.

• The focus continue on lowering tariffs and nontariff barriers to support the expansion of American exports.

• Bilateral, regional, and multilateral trade agreements — which are critical to consumers, workers, businesses, farmers and ranchers — continue to be advanced.

Trade as a Priority

California is one of the 10 largest economies in the world with a gross state product of more than $3 trillion.

International trade and investment are a major part of the economic engine for the state of California that broadly benefits businesses, communities, consumers and state government. California’s economy is more diversified than ever before, and the state’s prosperity is tied to exports and imports of both goods and services by California-based companies, to exports and imports through California’s transportation gateways, and to inflows and outflows of human and capital resources.

Accordingly, promoting the ability of California companies to compete more effectively in foreign markets continues to be a high priority for the CalChamber, along with attracting foreign business to the state.

Supporting global trade is about helping Main Street businesses. Most exporting firms in our state are small and medium-sized businesses. The jobs created in these trade-reliant sectors pay higher wages than their nontrade-related counterparts and create additional jobs in nontraded industries, such as restaurants, retail, hospitality and others.

The World Trade Organization (WTO) is the only global international organization dealing with the rules of trade between nations. Its main function is to ensure that trade flows as smoothly, predictably and freely as possible.

At its heart are the WTO agreements, negotiated and signed by the bulk of the world’s trading nations, and ratified or approved in their parliaments or legislatures. The goal is to help producers of goods and services, exporters and importers conduct business. The WTO gives U.S. and California businesses improved access to foreign markets and better rules to ensure that competition with foreign businesses is conducted fairly.

The CalChamber is pleased the major trading economies reached consensus on the Director General and now can focus on a path forward for the WTO in 2021. The revamp of the World Trade Organization should address the functioning of the Appellate Body, and support efforts to ensure our trading partners adhere to fair and transparent trade practices while being held accountable when they violate international rules.

The CalChamber opposes protectionist-oriented legislation that leads to higher prices and limited choices for consumers. The negative impact of this sort of policy often expands to include job loss in related industries, retaliation by our trade partners and violations in WTO and trade agreement provisions.

The CalChamber has supported a number of state and federal programs, but it should be noted that the CalChamber also dissuades the introduction of legislation that is unnecessary, unconstitutional or violates existing trade agreements.

Raising tariffs results in higher prices to the consumer for the specific product protected and in limited choices of products for consumers. Further, increased tariffs cause a net loss of jobs in related industries, retaliation by U.S. and California trading partners, and violate the spirit of our trade agreements.

One of the major challenges generally facing American exporters is the duty rates or tariffs and other assessments charged by other countries when goods are imported into those countries. The U.S. has the lowest average duty rate at 4.5%.

The CalChamber urges Congress to continue to support the lowering of duty rates with short phase-out periods as one means to support the expansion of American exports as free trade agreements are enacted.

The CalChamber also urges Congress to continue to support the reduction and eventual elimination of nontariff barriers, whether due to sanitary or phytosanitary certificates, lack of streamlined regulatory procedures, quotas, embargoes, assessments, and similar monetary and other challenges imposed to limit imports into the country.

Passage of trade promotion authority will help Congress and the President to work together to forge new and beneficial trade agreements for the United States.

Every president since Franklin D. Roosevelt has been granted authority to negotiate market-opening trade agreements in consultation with Congress. Congress will need to renew trade promotion authority again in 2021 to enable the United States to continue aggressively pursuing new trade deals. Without trade promotion authority, the United States will be compelled to sit on the sidelines while other countries negotiate preferential trade agreements that put U.S. companies at a competitive disadvantage.

The CalChamber, therefore, supports the extension of trade promotion authority so that the President of the United States may negotiate new multilateral, sectoral and regional trade agreements, ensuring that the United States may continue to gain access to world markets, resulting in an improved economy and additional employment of Americans.

Financially, this translates into the removal of billions of dollars in tariffs for U.S. exports. Trade agreements ensure that the United States may continue to gain access to world markets, which will result in an improved economy and additional employment of Americans. The CalChamber urges support of trade agreements that will continue to keep U.S. and California businesses competitive.

The CalChamber has asked the administration and Congress to continue to advance bilateral, regional and multilateral trade agreements which are critical to consumers, workers, businesses, farmers and ranchers.

In addition, the United States should reinvigorate efforts to establish free trade agreements with partners that share our trade philosophy, including the European Union, the United Kingdom, and Japan. These markets offer new access opportunities for American products and creating these alliances would ensure the U.S. can maintain its position as a major exporter.

For details on California interests in regions of the world, see the CalChamber Business Issues and Legislative Guide articles on Trans-Pacific Relations, Trans-Atlantic Relations, Sub-Saharan Africa, and the Americas. 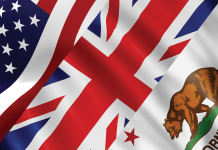