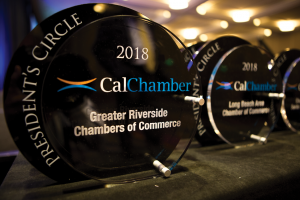 The California Chamber of Commerce has named 28 local chambers of commerce to receive the 2018 President’s Circle Award.

The award, first presented in 2009, recognizes chambers for excellence in business advocacy and helping their members comply with California employment laws. Representatives of the President’s Circle chambers were honored May 23 during the CalChamber Capitol Summit in Sacramento.

Seven of the chambers have received the award all 10 years it has been presented.

The 2018 recipients of the President’s Circle Award are as follows. An * marks recipients who have received the award all 10 years:

• The Chamber of the Santa Barbara Region: Ken Oplinger, president/CEO;