Rising interest rates typically serve as a brake on economic activity and there is some evidence activity may already be cooling off in anticipation of the Fed’s move. Expectations for higher interest rates have pushed the dollar higher against most major foreign currencies and have pulled commodity prices lower.

Manufacturing activity also has slowed, as evidenced by the recent drop in the ISM Manufacturing Survey below the key 50 break-even level and continued weakness in industrial production. Employment growth has held up relatively well, however, as many of the sectors most directly impacted by the stronger dollar, lower commodity prices and slower growth overseas tend to be capital intensive. More labor-intensive parts of the economy, including health care, professional and technical services, and the leisure and hospitality sector, have been less impacted.

The rise in interest rates and expectations for additional rate hikes in coming years raises risks for the California economy in the coming year. Recently, hiring in the Golden State has risen at a pace one-and-a-half times stronger than the rest of the country.

The state’s large agriculture sector once again had to contend with the drought, along with the added pressures of weaker global economic growth and a stronger dollar. Despite these challenges, farm income has held up relatively well and the state’s farm sector had a fairly good year on an overall basis. 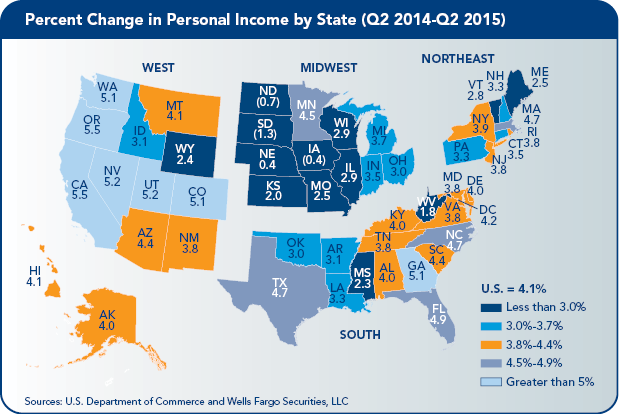 Nonfarm employment in California is up a solid 2.9% year over year, not far from the state’s three-year average of 3.1%. The Golden State has added 464,000 net new jobs from October of last year on a nonseasonally adjusted basis. Gains have been broad-based across a majority of industry sectors.

California’s steady pace of hiring has pulled the state’s unemployment rate down below 6% to 5.8% in October, its lowest reading since October 2007. On a year-to-date basis through October, the largest gains have been seen in the professional and business services sector, which added 130,000 new jobs.

This comes as no surprise, as employment in professional and business services includes many of the industry groups from the state’s rapidly growing tech and life sciences sectors. Employment in professional, scientific and technical services, which includes software engineering, computer system design, and scientific research and development, rose 6.2% over the year, an addition of 74,300 jobs. The bulk of this gain has been in San Francisco, San Diego and Los Angeles.

Hiring has ramped up considerably in California’s technology sector in recent years. The San Francisco Bay Area continues to benefit from the growth of new innovative enterprises.

Ride-hailing service company Uber recently revealed its plan to build its global headquarters in the Bay Area by 2017. The company will have a seven-story office building in Oakland, as well as two offices in San Francisco’s Mission Bay neighborhood. In total, Uber’s three locations will account for more than 800,000 square feet of real estate and is projected to house between 2,000 and 3,000 employees. Uber’s office in Oakland furthers the strong recent momentum in that market.

Additionally, Cupertino-based Apple has been snatching up office space across Silicon Valley to keep up with its rapidly expanding workforce, which now totals about 25,000 in the Santa Clara Valley. Apple’s new campus, “the spaceship,” is still under construction and is expected to have 13,000 workers upon completion.

In addition, cloud storage company Dropbox recently announced plans to centralize its headquarters in San Francisco’s South of Market (SOMA) neighborhood, and will expand into three buildings in the area.

Tourism is another bright spot in California’s economy. Hotel occupancy rates and revenue per available room (RevPAR) have risen across the state.

The San Francisco Bay Area, Santa Rosa, and Napa Valley areas saw the highest occupancy rates in September, reporting rates of 86%, 85.6% and 84.4%, respectively. The state as a whole posted a 77% occupancy rate, much higher than the national average of 67.9%.

Growth has fueled hiring in the leisure and hospitality sector, which is likely to continue as plans are currently in the works for expansions at several theme parks, as well as a number of new hotels.

Furthermore, the data does not include the recently released “The Hunger Games: Mockingjay – Part 2,” which grossed over $100 million during its debut. Additionally, Walt Disney Co.’s highly anticipated “Star Wars: The Force Awakens” opened in December. These contributions, along with the slew of pictures opening this upcoming holiday season are likely to push 2015’s total box office receipts above their previous high.

Growing demand from China also is contributing to Hollywood’s success. China is now the second largest box office territory in the world and the country’s revenues continue to climb. China’s box office receipts have seen double-digit increases over the past several years. Four of China’s top 10 films for 2015 were Hollywood imports, led by “Fast and Furious 7,” at $379 million.

Last year, California more than tripled the size of the California film and television tax credit to $330 million annually in an effort to boost film production in Hollywood. Over the last several years, California has seen large-budget movies and TV dramas flee the state, moving production to more affordable states, including Georgia and Louisiana. Although California’s tax credit is not as generous as some credits given in competing states, the Golden State’s new incentives have helped reverse “runaway production” and have clearly given the industry a needed boost.

The most recent data from FilmLA provides some idea of how the tax credits have helped revive the entertainment industry in Los Angeles. On-location film production in the Greater Los Angeles Area increased 3.8% in the third quarter to 9,510 shoot days. A new record for number of on-location television production was set in the third quarter at 4,308 shoot days. TV pilot and TV sitcom had the largest percentage gains, while TV reality experienced the only decline.

In addition, the impact of the film tax credit was apparent in the reported third quarter numbers. Incentive-qualified projects accounted for 20.8% of the on-location shoot days in TV drama, 8.6% for TV sitcoms and 33.6% for TV pilots. The new tax incentive has helped spur a significant amount of work in the California film industry and is likely to continue to help Hollywood remain competitive with other markets heading into 2016.

Housing remains a significant challenge for California. Home prices have continued to rise much faster than income, creating a large affordability hurdle for many homebuyers. According to the California Association of Realtors, the median single-family home price in California rose 5.6% year over year to $480,630 in October.

There have been signs of slowing price appreciation more recently in the month-to-month data; weaker global economic growth is likely beginning to weigh on foreign demand. California home sales have ramped up over the year, with existing single-family home sales up 5.8% over the year on a three-month moving average basis.

Residential construction also is on the upswing. Single- and multifamily housing permits have made notable gains and are currently at post-recession highs. A significant portion of growth has come from apartments, particularly in the San Francisco Bay Area and Los Angeles. 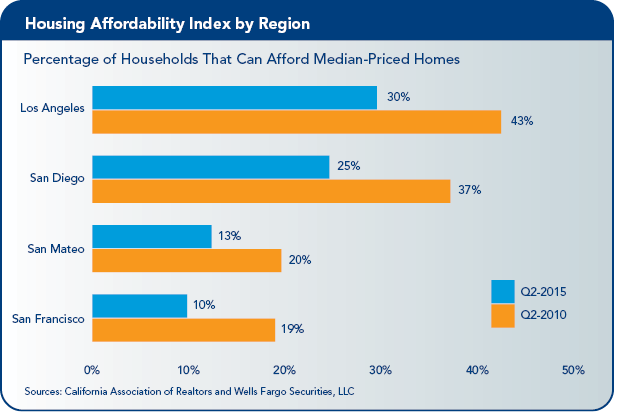 Four years into the drought, California’s agriculture sector has weathered the situation relatively well. Strong overall demand for California-grown fruits, nuts and vegetables has aided the farm economy through one of the most difficult operating environments in its history.

While farm receipts have held up well on an overall basis, costs have increased dramatically for many farmers and prices for some key products, most notably dairy, remain under considerable pressure. Diminishing water reserves and the stronger U.S. dollar have added to the hardships farmers face.

According to the latest drought impact report from the University of California, Davis Center for Watershed Sciences, by year end, the state’s agricultural economy will have lost about $1.84 billion and 10,000 jobs as an effect of the drought.

The drought has caused famers to cut back acreage, particularly on water-intensive crops. The U.S. Department of Agriculture (USDA) reported that California cotton production has declined for four consecutive years to an estimated 516,000 bales in 2015, about one-third of the production levels seen in the mid-2000s. Limited acreage has subsequently led to a decline in crop value.

California’s rice industry also has been impacted significantly by the unrelenting drought. Low reservoir levels and water restrictions caused rice acreage in California to be curtailed more than 23% in 2014 and decline an additional 5% this year. The USDA reported that rice plantings in 2015 amounted to 416,000 acres, the lowest level since 1992.

While the drought has been a factor in the state’s acreage and production decline, some of the drop is due to the continued shift from lower- to higher-value crops. This trend is evidenced by the growth of fruit and nut acreage and the decline in field crop acreage over the past several years.

Rising crop prices have helped to boost agricultural revenue, allowing California to remain the No. 1 state in the nation for largest total agriculture value in 2014. The USDA reported that California cash farm receipts for total crops peaked in 2014 at $38.2 billion, a slight increase from the $38.1 billion earned in 2013.

California’s economy has thrived amid what has otherwise been a somewhat disappointing economic recovery. Job growth has consistently outpaced the nation in recent years and personal income and gross state product are both expanding at some of the fastest rates in the nation.

The state’s economic recovery has been extremely uneven, however, with the strongest growth coming along the coast, particularly in areas benefitting from the state’s leading position in the rapidly growing information technology and life sciences sectors. Tourism and international trade also are growing solidly. These industries, however, do not tend to generate anywhere near as many high-paying jobs as the tech sector does. Moreover, growth in the interior of the state, which is more dependent on agriculture, has tended to lag. 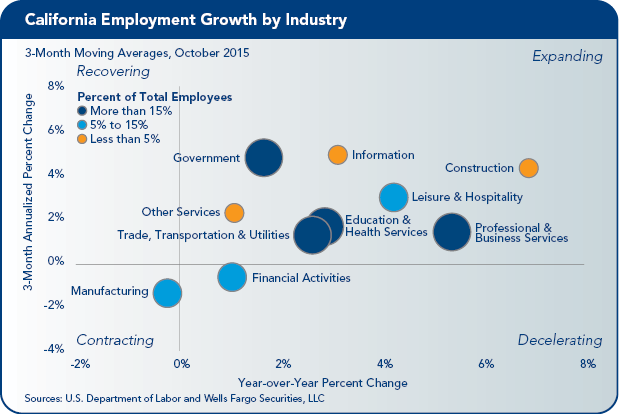 With so much growth concentrated in the state’s larger metropolitan areas, housing costs have skyrocketed. There also have been persistent efforts underway to raise the minimum wage and several local communities have already done so. Businesses also have left the state in fairly large numbers, seeking both lower operating costs and less regulatory burden.

That said, California has not only held up relatively well, but somehow managed to thrive, at least on an overall basis. The council expects California’s good fortune to hold for at least another year. Employment gains may moderate somewhat, however, as access to capital begins to tighten a bit amid rising interest rates.

Some of the most recent initial public offerings for tech companies have come in well below the implied values in the private-equity market, a development that should ripple back through the funding pipeline. Slower growth overseas also might present a bit of challenge, as exports slow further. Home sales and new home construction, which have seen only a modest recovery so far, also may see activity improve a bit more slowly, as higher mortgage rates further crimp housing affordability.

Despite all these challenges, the state’s economic growth should still easily outpace the national average in 2016 and the unemployment rate should approach the national rate toward the end of the year.