While most key economic reports have continued to show strength, commodity prices and the financial markets have clearly felt the sting from the cold winds blowing in from overseas. The financial headlines from the first part of this year have been dominated by plummeting oil prices, sharply lower long-term bond yields, and the return of volatility in the equity markets. The dollar also has continued to strengthen against most other currencies as investors, businesses and individuals around the world recognize the better risk-reward relationship in holding U.S. assets at this tumultuous time.

Shifts in the global economy and the recent plunge in oil prices have caused forecasts for first quarter real gross domestic product (GDP) growth to be scaled back. Real GDP is now expected to rise at just a 1.5% pace in the first quarter, as oil companies slash their capital spending budgets and slower economic growth around the world constrains U.S. exports. The forecast for the year as a whole, however, has been less impacted. The benefits from lower gasoline prices will eventually show up in the form of stronger consumer spending and improved corporate profits.

The slow start to GDP growth may present new challenges to the Fed. Much of what is slowing in the economy is occurring in capital-intensive industries, which means the hit to GDP is far greater than to employment, which has actually been quite strong in recent months. Productivity growth has also slowed considerably in recent months and will likely get off to a slow start in 2015.

Nevertheless, headline inflation figures have followed oil prices broadly lower. Core inflation has been less impacted, but has still moderated a touch. The Fed remains on course to raise interest rates around the middle of this year, when circumstances surrounding global economic growth and oil prices will likely be much different than they are today.

California’s economy continues to power forward, with many of the Golden State’s largest and most important industries gaining momentum over the course of 2014. High-tech employers have shown no sign of slowing their hiring. Employment in professional, scientific and technical services, the industry with the largest number of tech-related workers, grew 4.3% in 2014. San Francisco, San Jose and San Diego are all benefitting from the strong growth in this major industry group.

Health services also are expanding rapidly and appear to have adjusted to the rollout of the Affordable Care Act with only minimal disruption. Construction has picked up to keep pace with the rapidly expanding economy and demand for apartments, warehouse and office space is rising solidly.

Home sales remains sluggish, but the trend seems to be somewhat more positive than we have seen nationwide. Home price appreciation continues to run ahead of the national average, reflecting both stronger economic gains and a scarcity of developable land.

Although we expect California’s economy to continue to grow, the state is not without its challenges. Growth has moderated recently, and the tremendous surge in tech-related hiring and associated construction projects is unlikely to be sustained longer term. Retailers and financial services firms are still posting only modest gains. 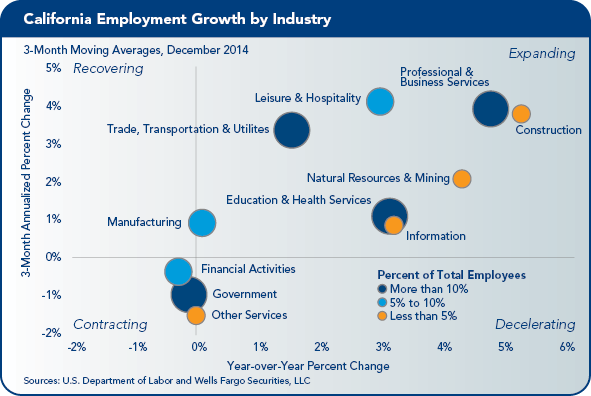 In addition, labor disputes at West Coast ports could push importers to make more permanent adjustments to their supply chains away from Los Angeles and Long Beach. Lower oil prices are weighing on the energy producers in Kern County, and a lack of water remains a challenge for farmers and residents alike.

In addition, the state’s high costs of living, combined with sluggish wage and salary growth for middle income households, has exacerbated the out-migration of residents. Few of these problems are truly new, however, and California seems to continuously prove that none of them are insurmountable. 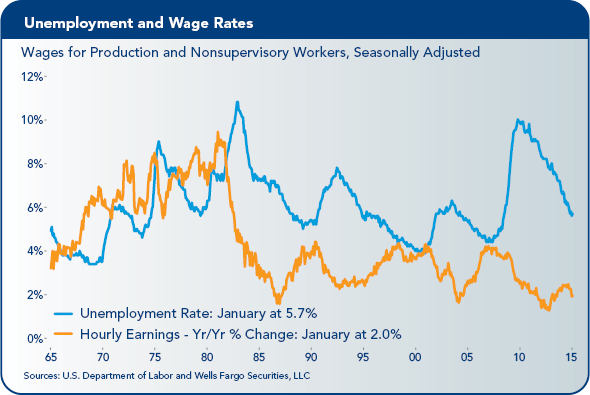 So far, the state seems to be weathering its challenges rather gracefully. The ongoing port dispute at the Port of Los Angeles and Port of Long Beach is creating some real hardship for businesses in Southern California. While some of loss figures bandied about may be over the top, the losses for individual businesses are quite meaningful.

Despite the ongoing dispute, which has left a flotilla of ships at sea waiting to unload, activity at Port of Los Angeles through the end of 2014 was actually 6% higher than the year before, and the Port of Long Beach also showed strong growth. Despite any bottlenecks that have occurred, those ports are busier than last year, though activity would certainly have been stronger had there been no disruptions.

Estimating the impact from the work stoppage is difficult. Some traffic is being diverted to other ports and some firms had built precautionary stockpiles in anticipation of some sort of supply shock. Most firms, however, operate with extremely lean inventories and cuts in production at manufacturing facilities along the West Coast and elsewhere are expected.

In addition, businesses involved with perishables, including seafood and produce, will likely suffer some losses. Moreover, the longer the dispute festers, the more likely that Midwest and Northeast businesses will look to alternative ports, fueling growth at several South Atlantic ports. 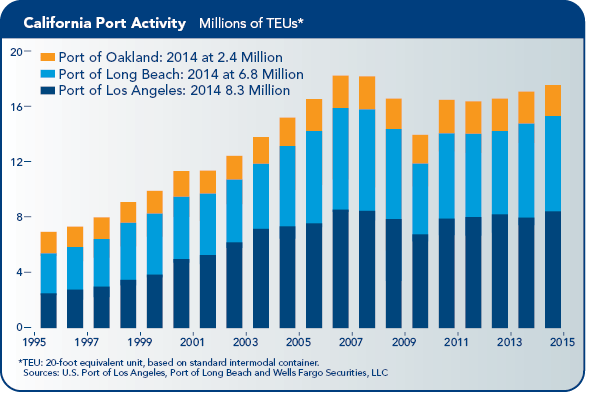 Drought is a major long-term challenge for California. Farmers have suffered as a result, but higher prices of key crops are partially offsetting low yields and farmers are moving toward more water-efficient crops. Almond and grape prices received in 2014 in California were both well above their year-ago levels. In addition, the scarcity of fresh water has spurred investment in much-needed infrastructure improvements, including the desalination plant in Carlsbad and numerous smaller water storage and water treatment projects around the state.

Another major challenge for the state is that more residents move out of California each year than move in. This domestic outmigration has long been a cause for concern and is frequently blamed on the state’s high housing costs. California does benefit from positive net migration, thanks to net international migration. San Francisco and Oakland, however, actually have positive domestic net migration, which is somewhat surprising given how expensive the Bay Area is. Domestic net migration is strongest in Oakland, which offers relatively affordable housing when compared to San Francisco. A booming labor market is helping to draw more people to the area.

Despite high housing costs, relatively few households spend more than 30% of their income on housing. In the San Francisco metro area, 39.9% of households spent 30% or more of their income on housing costs, while that share was 43.4% statewide and 47.5% in Los Angeles. Although these numbers are above the national average, they show there is more flexibility in the housing market than first appears.

The office market in the state continues to flourish. Employment in the construction of nonresidential buildings is up a whopping 9.6% from a year ago.

The office market is tightest in San Francisco where the vacancy rate is just 11.7%, considerably lower than the nation’s 16.7%. Demand remains strong in the San Francisco market, as the tech sector continues to snap up large swathes of space, with notable large leases from Salesforce, Uber, Yelp and Pinterest.

In addition to high rents, another threat to the San Francisco office market is Prop M, which limits the amount of office space that can be built in the city. There appear to be some ways to temporarily work around this cap, but the pace of building has been strong and the current limit of 875,000-square-feet per year is unlikely to allow for supply to keep up with demand and could push rents even higher.

With an office vacancy rate of 17.7%, San Jose has more supply than the markets along the Peninsula. Activity in Silicon Valley, however, is still quite high. About 3 million square feet of space is under construction in Santa Clara-Sunnyvale and another 1 million square feet in Cupertino. The new supply is doing little to alleviate demand. The vacancy rate has come down considerably from recent highs over the past couple of years. Although we remain constructive on the metro area, demand slipped some in the fourth quarter, which may point to some of the competition Silicon Valley is facing from San Francisco and elsewhere.

Demand for office space in Southern California has been considerably softer. Los Angeles has only recently started to improve. Although there are some sizable projects under construction, including about 500,000 square feet in downtown and another 300,000 square feet in LAX/El Segundo and Long Beach. Los Angeles’s broader economic recovery has been more modest than in other parts of the state.

While more modest than the Bay Area, the creative sector has been vibrant throughout Southern California, particularly companies producing digital entertainment content. Some of that work is beginning to come downtown. The office vacancy rate in Los Angeles is slightly below the national average and rents are increasing, which could help spur some more construction. Moreover, there has been a great deal of activity in the hotel and apartment sector.

Similarly, San Diego’s office market is holding its own, with very little space currently under construction. Leasing remains steady and rents and resale prices continue to rise, benefitting from a lack of new supply and low interest rates. Considerably more projects are in the planning phases, however, though the physical construction still appears to be a ways off.

Home sales improved only modestly in 2014, with the single-family market up just 0.6% over the year, and the condo and townhome market rising a paltry 0.2%. Home sales languished nationwide in 2014, so the weak growth rates actually look quite a bit better when comparing them to national numbers. San Francisco, San Diego and the Inland Empire all saw home sales rise this past year, while Los Angeles, Orange County and much of the Bay Area outside of San Francisco posted declines.

Inventories have risen slightly throughout the state, which should provide more options to buyers. The inventory of homes available for sale in the Bay Area remains exceptionally lean. The pace of single-family construction has leveled off at fairly low levels, but is showing signs of reviving in a handful of areas. The strongest markets have few developed lots available for a single-family construction. The multifamily sector continues to strengthen, which comes somewhat in contrast to the slowdown seen nationwide. 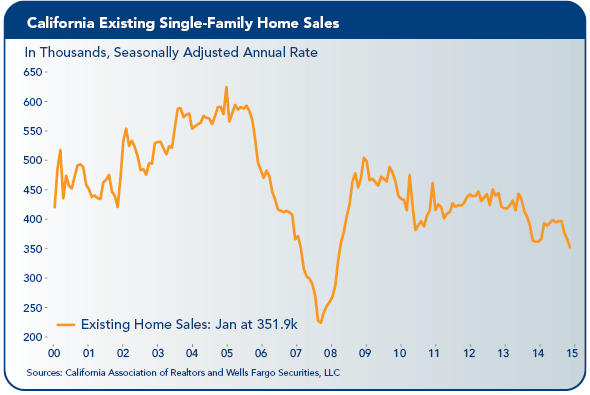 The apartment market is exceptionally strong in the Bay Area and San Diego. Vacancy rates in San Jose, San Diego, Los Angeles and San Francisco are all below the national average, which is encouraging more growth in those markets. Although home prices have moderated recently, they remain 7% higher than a year ago. Thanks to the faster-than-average appreciation, home prices are just 15.2% below their prerecession peak, not much further than the national average of 13.4%. 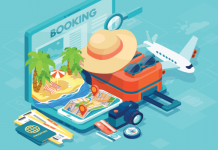 California Travel Looks to Bounce Back After Sharp Pandemic Decline 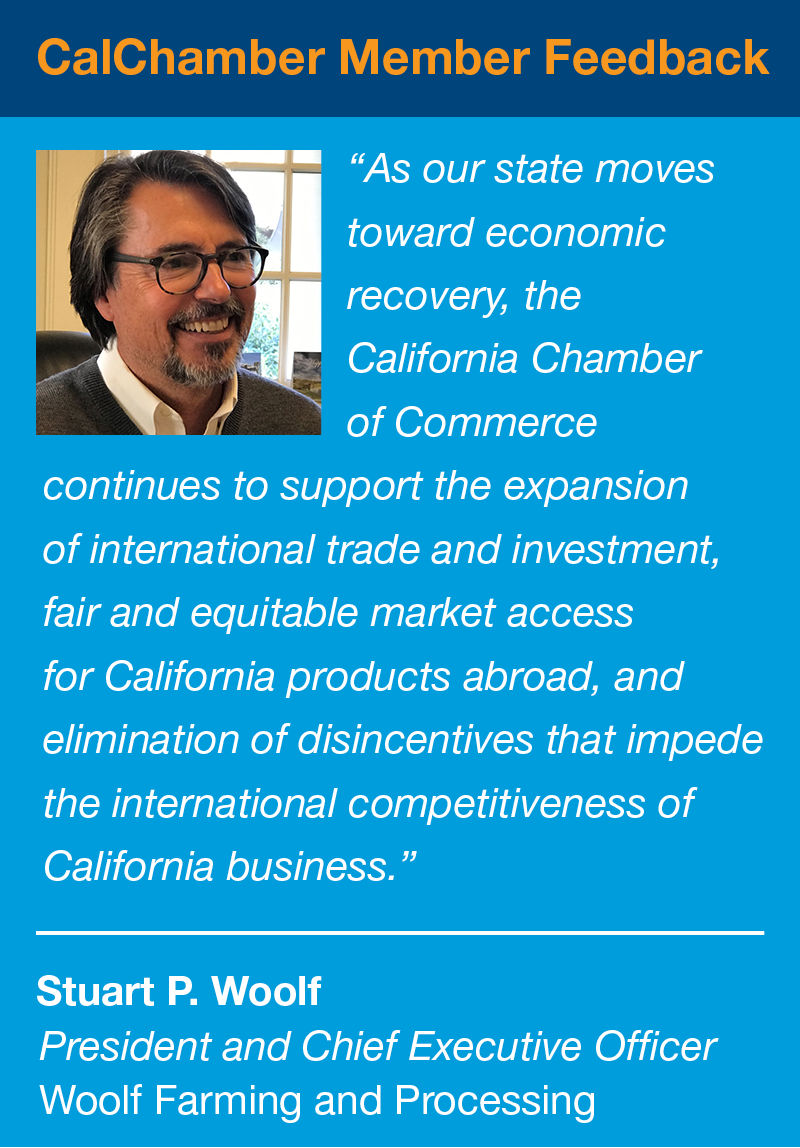