Fifty years after President Richard Nixon made his historic visit to China, 20 years after China joined the World Trade Organization (WTO), and following the Olympics in Beijing, the Office of the U.S. Trade Representative (USTR) has released its 20th report pursuant the U.S.-China Relations Act of 2000.

The WTO and its 164 member nations is the only global international organization dealing with the rules of trade between nations. At its heart are the WTO agreements, negotiated and signed by the bulk of the world’s trading nations and ratified or approved in their parliaments or legislatures. The goal is to help producers of goods and services, exporters and importers conduct their business.

On Saturday, November 10, 2001, concluding nearly 15 years of negotiations, members of the WTO — meeting in Doha, Qatar — unanimously approved China’s application for membership. China’s own Parliament immediately ratified the accession terms outlined in the nearly 1,000-page text. China waited 30 days and officially became a member of the WTO on Tuesday, December 11, 2001.

As a result of the negotiations, China agreed to undertake a series of important commitments to open and liberalize its regime in order to better integrate in the world economy and offer a more predictable environment for trade and foreign investment in accordance with WTO rules.

Among some of the commitments undertaken by China:

• China will provide nondiscriminatory treatment to all WTO members. All foreign individuals and enterprises, including those not invested or registered in China, will be accorded treatment no less favorable than that accorded to enterprises in China with respect to the right to trade.

• China will eliminate dual pricing practices as well as differences in treatment accorded to goods produced for sale in China in comparison to those produced for export.

• Price controls will not be used for purposes of affording protection to domestic industries or services providers.

• The WTO agreement will be implemented by China in an effective and uniform manner by revising its existing domestic laws and enacting new legislation fully in compliance with the WTO agreement.

• Within three years of accession, all enterprises will have the right to import and export all goods and trade them throughout the customs territory with limited exceptions.

• China will not maintain or introduce, but limit any export subsidies on agricultural products.

Taiwan also was approved for WTO accession in 2001. Admission of Taiwan was prearranged to follow China’s admission, with terms being completed 18 months prior. China originally objected to Taiwan’s independent admission, but it was agreed that the two are separate, functioning as different customs territories and imposing different regulations on the importation of goods. Taiwan is known as Chinese Taipei in the WTO.

In Part One of the report covering 2021, the USTR provides an assessment of China’s WTO membership, including the unique and very serious challenges that China’s state-led, non-market approach to the economy and trade continue to pose for the multilateral trading system.

In Part Two, it reviews the effectiveness of the various strategies that have been pursued over the years to address the unique problems posed by China.

In Part Three, USTR emphasizes the critical need for new and more effective strategies — including taking actions outside the WTO where necessary — to address those problems.

Finally, in Part Four, USTR catalogues the numerous problematic policies and practices that currently stem from China’s state-led, non-market approach to the economy and trade.

See the CalChamber Top Story for further details on the report.

The California Chamber of Commerce, in keeping with longstanding policy, enthusiastically supports free trade worldwide, expansion of international trade and investment, fair and equitable market access for California products abroad and elimination of disincentives that impede the international competitiveness of California business.

As with most business organizations more than 20 years ago, the CalChamber supported China’s entry into the WTO. More recently, one of CalChamber’s five international priorities specifically asks that the revamp of the WTO address the functioning of the appellate body, and support efforts to ensure our trading partners adhere to fair and transparent trade practices while being held accountable when they violate international rules.

• Trade be a priority.

• The revamp of the WTO address the functioning of the Appellate Body, and support efforts to ensure our trading partners adhere to fair and transparent trade practices while being held accountable when they violate international rules.

• The focus continue on lowering tariffs and nontariff barriers to support the expansion of American exports.

• Bilateral, regional, and multilateral trade agreements — which are critical to consumers, workers, businesses, farmers and ranchers — continue to be advanced. 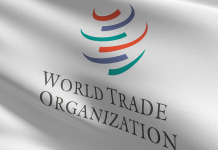