Economic recoveries and expansions never go as planned. This one is no exception. It has been marred by two major COVID outbreaks, supply shortages, supply chain bottlenecks, and higher prices.

These impediments will linger for some time. But despite these headwinds, the economy’s underlying fundamentals remain firm, supported by solid balance sheets of households and corporations.

Long gone are the stimulus checks, the excitement of a reopening economy, and an increase in vaccinations that came together and drove intense levels of consumer spending.

In Q3, the economy was also hampered by increased COVID cases and was plagued by continued shortages and supply chain snags.

Looking ahead, the early read on Q4 growth should show an increase of 5%. The higher growth rate will come from more robust personal spending and further improvements in building back depleted inventories. 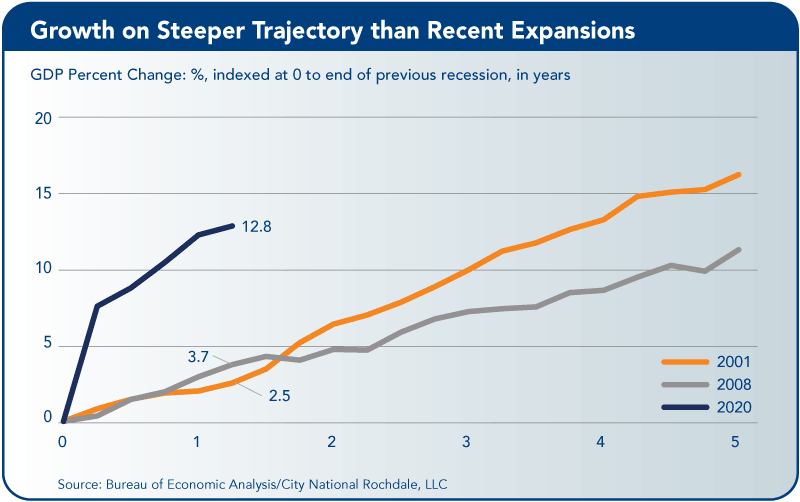 Stagflation is not a concern

The slower rate of growth in Q2 and higher levels of inflation have led to some news articles about the return of stagflation. “Stagflation” left the lexicon a few decades back, but by definition, it is the endless combination of high unemployment and high inflation.

Famed economist Arthur Okun created a simple chart that shows how badly people are feeling during stagflation. It adds the unemployment rate and the annual inflation rate, and he called it the Misery Index. The current level is 10.2%, a little above the long-term average of 9.3%.

It usually is high following a recession, but tends to fall during an expansion. We expect it to decline as the unemployment rate continues to fall, supply chain problems get resolved, and inflation decreases. The level above the average will not be sustained.

Labor growth has been vital in the recovery/expansion, but the monthly gains have been volatile, due heavily to COVID. Overall, the pace of hiring has been much stronger than the past expansions, due heavily to the type of recession (stay-at-home mandates), and the enormous amount of monetary and fiscal stimulus policy.

That said, we expect the pace of job growth to be held back by labor availability in the coming months, but workers should continue to trickle back into the hiring pool. More discernable improvement should come next spring. Constraints such as health concerns and unpredictable childcare should ease on the other side of the winter season.

The financial importance of returning to work should be more significant with the increasing amount of time between fiscal support and the inflation gnawing away at individuals’ spending power. These factors should help the hiring to continue at a robust pace and keep the level of employment on track to recover fully around the end of next year.

So far in this expansion, wage gains have been led by industries with the lowest wages, which implies a certain degree of flattening in the income distribution.

For example, leisure and hospitality workers earned just $17.15/hour in December 2020, and have enjoyed 11% wage growth since then. In contrast, the highest-paid workers in the information sector have enjoyed very modest wage gains that lag inflation.

Thus, the inflation squeeze disproportionately impacts higher-income households that are better positioned to absorb it, given their ample savings and wealth. This is why inflation has not led to demand destruction so far.

Fed action not effective at this type of inflation

As for inflation, it is much higher — consumer price index (CPI) at 6.2% year-over-year — than the Federal Reserve’s target rate of averaging 2%. But there are different types of inflation, each requiring a different response from the Fed.

In most economic expansions, excessive demand causes higher prices, so the Fed comes in and raises short-term interest rates to quell the strong demand and prices fall.

The inflation in this cycle is caused primarily by production and distribution disruptions; this expansion has been marked by COVID shutdowns of factories, disruptions in semiconductor production, port closures and congestion, and widespread labor shortages.

The Fed raising interest rates will not fix any of those problems, and will run the risk of slowing demand, which in turn would slow the pace of hiring, delaying the economy in reaching the Fed’s goal of maximum employment.