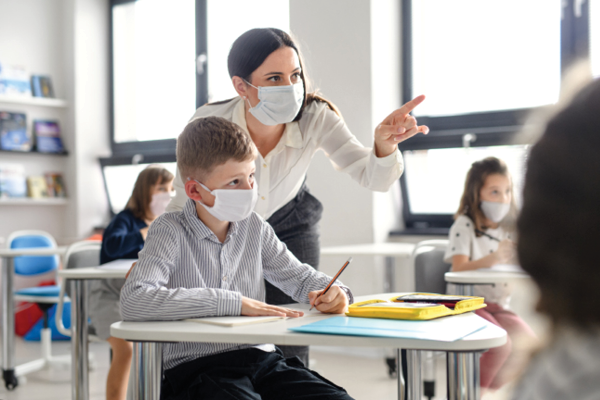 The time has come for the Legislature to join Governor Gavin Newsom in finalizing an agreement to reopen California public schools.

Governor Newsom has laid out a conservative, but realistic plan to reopen schools in California, applying the lessons learned from science and best practices, and recognizing that the COVID-19 infection trend is beginning to abate.

State officials announced on February 9 that 37 counties are below the threshold for reopening K–6 schools, as determined by the California Department of Public Health.

On February 10, CalChamber Executive Vice President Jennifer Barrera joined a group of business leaders at a press conference to underscore support for the Governor’s proposal to get California schools safely open as soon as possible.

The CalChamber sent a letter on February 9 to California legislators urging them to reach an agreement with the Governor rapidly on a plan and funding so schools may immediately accommodate some or all students on campus when it is safe to do so.

The CalChamber has pointed out that society, commerce and government have responded to the pandemic. The Governor and the Legislature have expanded the social safety net and provided some economic relief for employers and employees.

Front line workers, whether hospital employees, EMTs, firefighters, grocers, truckers, utility workers and many, many others have met the challenge by continuing to serve the public. Employers have reorganized the workplace where possible to enable remote working or safer on-site conditions.

Now it is time for our public schools to fully join the effort.

State education officials and other surveys estimate that about 70% of the state’s school districts are still in distance learning — accounting for roughly 85% of the student population.

Nobody disagrees that school children have been devastated by the inability or unwillingness to reopen schools:

• School enrollments have dropped precipitously as many children have either disconnected or never were connected in the first place.

• A survey of Los Angeles teachers found that 94% said low student engagement was a barrier to remote learning. The vast majority of teachers say their students lack quiet spaces, adequate technology and high-speed internet and do not have schoolwork help from an adult.

• All these problems are even worse for the students who were disadvantaged and underserved before the pandemic crisis. Quite simply, poor Black and Latino children suffer the most from shuttered schools.

While the worst impacts have befallen students, distance learning has also affected the workplace. Many of our employees are parents or guardians of public school students who are struggling with remote learning and its effects.

Nearly a third of employers nationally have seen employees leave the workforce — primarily in businesses that are public facing, such as retail, leisure and entertainment, health care and social assistance.

Another 29% of employers saw employees leaving their businesses to seek employment elsewhere. This churn is not just because these workers lost jobs, but because in many cases their jobs are incompatible with their family responsibilities, like supervision of their remote-learning children and lack of adequate child care.

This is an existential issue for the California economy. Our schoolchildren are the future employees for California small and large businesses. Other nations are prioritizing returning students to schools.

Reopening schools is not only a matter of student achievement, mental health and family normalcy, but is a matter of global competitiveness and viability for California businesses.

Outside of the education establishment, the notion of returning students to the classroom is rapidly gaining credibility and urgency:

• President Joseph Biden has recognized the urgency of this issue, vowing to reopen schools within his first 100 days in office.

• Pediatricians in Southern California have called for schools to reopen.

The extraordinary efforts by teachers and school officials this year to ramp up distance learning in the face of enormous uncertainty about the nature of the virus must be recognized. Yet, we are in a different place now.

With more information about how to minimize risk and under the guidance of public health officials, it is clear that we can open our schools safely and soon.