More Important Than Ever: Maintaining and Improving Free Trade, Investment

The world has quickly changed over the last few months and during these strange and uncertain times, the importance of international trade has been on display across the world. Supply chains have been put to the test and global connectivity has proven vital in quickly securing much-needed supplies to fight the COVID-19 pandemic around the world.

The World Trade Organization (WTO) stated in an April 2020 report that it expects world trade to fall drastically by between 13% and 32% in 2020 as normal economic activity and everyday life has been disrupted by the pandemic. The WTO expects a recovery in 2021, but is unsure what that will look like as it depends on the duration of the outbreak and the policy responses around the world (WTO).

Beacon Economics founder Chris Thornberg, chair of the California Chamber of Commerce Economic Advisory Council, has a slightly more positive outlook for the post-COVID-19 recovery. Although the economy has taken an unprecedented hit as economic activity has declined drastically and unemployment has increased drastically, he says a “V” shaped recovery is possible.

Beacon Economics reported that the economy contracted by 5% to 10% from the first to second quarter, which is larger than anything experienced previously. Beacon anticipates that the U.S. economy will contract by 7.5% to 10% in the second quarter, at an annualized rate of 30% to 40%.

Thornberg points toward the positive amidst the gloom, commenting that the economy is much less fragile now than it has been in the past. (Beacon Economics).

In California, trade took an anticipated tumble as well; March 2020 showed a 12.7% decline in exports from the year before and a 19.1% drop in re-exports. On a positive note, however, California’s leading agricultural export of almonds was up 3.5% from the previous year (Beacon Economics).

Maintaining and improving worldwide free trade is critical during this time as most companies that export have an easier time riding out fluctuations in the U.S. economy, and are more likely to stay in business. 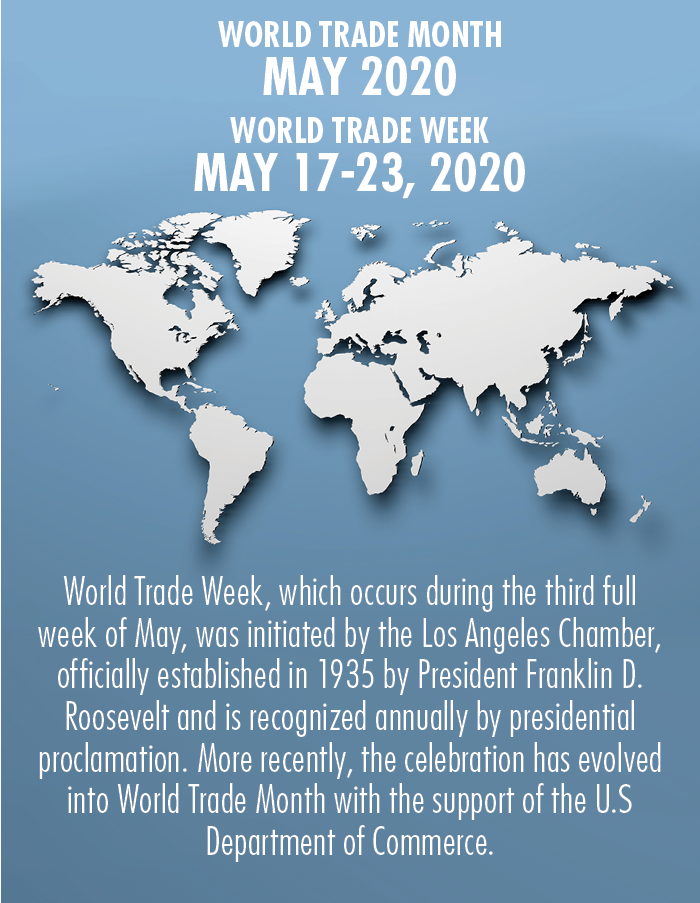 With trade being a top-tier national issue, the CalChamber continues to communicate its international trade priorities to secure a national free trade agenda. Such an agenda is in keeping with the CalChamber’s long-standing support for eliminating disincentives that impede the international competitiveness of California business.

The statistics underscore the importance of our international connections. In 2019, California exported $173.3 billion to 229 foreign economies, down slightly from $178.4 billion in 2018, according to the U.S. Department of Commerce. California’s top export markets are Mexico, Canada, China, Japan and South Korea. California maintained its perennial position as a top exporting state, accounting for 10.5% of total U.S. exports.

Trade agreements (the United States has 20) ensure that the nation and its businesses may continue to gain access to world markets, resulting in an improved economy and additional jobs for Americans. CalChamber trade priorities for 2020 include the following:

Since the beginning of the Trump administration, the U.S. has invested more than $2.9 billion to support the economic portion of the Indo-Pacific Initiative and nearly $600 million to support digital connectivity and cybersecurity, promote sustainable infrastructure development, and strengthen energy security and access.

It is hoped that the U.S. and Japan will continue to expand areas of cooperation and deepen their understanding of each other’s respective views and positions.

California continues to be the top exporting state to Japan, and Japan has remained California’s fourth largest export market since 2010.

• U.S.-China Relations: After two years of escalating tariffs on both sides, the U.S. and China reached a “Phase 1” trade deal in October 2019 and agreed on a tariff rollback in November. The “mini trade deal” was sealed in December 2019. The Phase 1 deal requires China to increase purchases of U.S. farm goods within two years, as well as enact financial services and intellectual property commitments. At the beginning of 2020, China committed to buying $200 billion worth of U.S. products, but this has since been delayed due to the COVID-19 pandemic.

The CalChamber is hopeful the Trump administration and China will remain committed to following through with the Phase 1 trade deal, despite new tensions related to the pandemic.

• U.S.-United Kingdom Trade Agreement: The United States maintains a deep trade and investment relationship with the United Kingdom. The U.K. officially left the European Union as of January 31, 2020, and after a delay due to the COVID-19 pandemic, negotiations formally began in May via video conference. The United Kingdom is California’s 11th largest export destination.

The CalChamber is hopeful that the U.S. and U.K. will agree to a comprehensive free trade agreement quickly. The CalChamber supports the goal of strengthening the trading and investment relationship between the two countries, with a focus on securing open market access.

• U.S.-European Union Trade Agreement: The European Union is one of the three new markets for which President Trump announced in October 2018 his intent to enter into trade negotiations. California is a top exporting state to the EU, and the single market presents a stable one with huge opportunity for California companies.

Negotiations have informally been put on ice due to the COVID-19 pandemic; however, the CalChamber is optimistic that the U.S. and EU will continue free trade negotiations at some point in the near future. The CalChamber recognizes the timely importance of deepening the world’s largest trading and investment relationship, with a focus on trade and investment initiatives.

World trade is headed for a slowdown, according to forecasts released by two global groups this month. In an updated trade outlook released on October 5, the World Trade Organization (WTO) said world trade will...