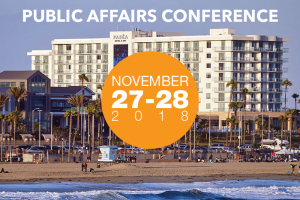 The dust will have settled on California’s 2018 mid-term elections when attendees gather for the California Chamber of Commerce Public Affairs Conference on November 27–28 in Huntington Beach.

Election results and their meaning for the state will dominate the topics.

Opening the conference on the afternoon of Tuesday, November 27 will be a presentation by PSB Research pollsters Robert Green and Adam Rosenblatt based on the annual CalChamber survey of California voter attitudes.

Next, a panel moderated by Martin Wilson, CalChamber executive vice president, public affairs, will review the results of statewide campaigns.

CalChamber President and CEO Allan Zaremberg will moderate a “New Kids on the Block” session with a bipartisan group of newly elected members of the Senate and Assembly—the 2019 freshman class.

“Climate Resiliency & Critical Infrastructure” will be the focus of panel discussions the morning of Wednesday, November 28. Panelists will include a bipartisan group of elected officials.

Featured luncheon speakers will be Paul Begala, Democratic political analyst and commentator for CNN; and Mike Murphy, a Republican media consultant and partner in the Revolution Agency.

More information on the agenda, registration, lodging and sponsorship opportunities is available on the conference website at www.calchamber.com/2018publicaffairs.

Legislators, policy experts and opinion leaders gathered at the CalChamber Public Affairs Conference on November 29–30 to share insights on the 2022 election results and California policy issues, past and future. Photos by Matt Lara SILVER...