Like the U.S., California’s economy continued to roll forward in the first part of 2017. The unemployment rate edged down, nonfarm jobs maintained an upward trajectory and grew at a modest pace, and economic activity in the state advanced at a somewhat faster rate than the nation as a whole.

As of April, the state’s wage and salary (nonfarm) jobs grew by 1.4% year-over-year, corresponding to a year-over-year gain of 236,700 jobs.

Most of the state’s private industries added jobs in yearly terms in the first part of 2017. Health Care led the way in absolute terms with 55,600 jobs added in April, followed by Leisure and Hospitality (+51,000), and Construction (+38,000).

By contrast, the Government sector registered a year-over-year increase of 44,400 jobs as of April. 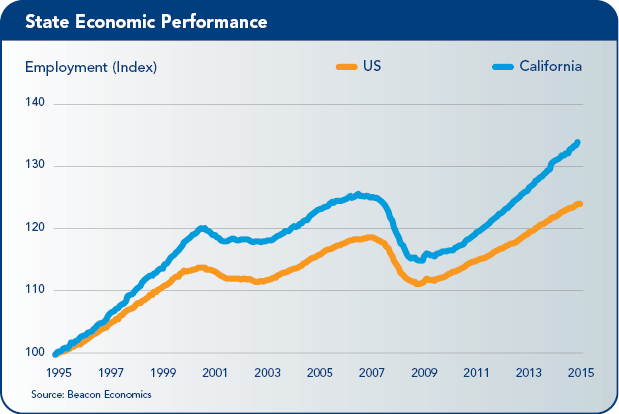 Although the California economy has continued to grow, the pace of growth has slowed markedly in recent months: The 1.4% employment gain in April 2017 was less than half of the 3.3% rate achieved one year earlier.

In a significant reversal of trend, Information was down by 1.7% year-to-year in April after an impressive 9.7% yearly gain a year ago.

Keep in mind that California has seen impressive job gains over the last five years. From 2012 through 2016, statewide job gains averaged 2.7% growth per year. That is more than double the 25-year average of 1.1%, and was outpaced only in the late 1990s when the rate of growth hit 3.2%, also over a five-year stretch.

Moreover, the slowdown is not exclusive to California. In fact, U.S. job growth slowed from 1.9% annually in April 2016 to 1.5% in April of this year. So, while job growth in California has decelerated, the state is still adding jobs at an above-average rate. 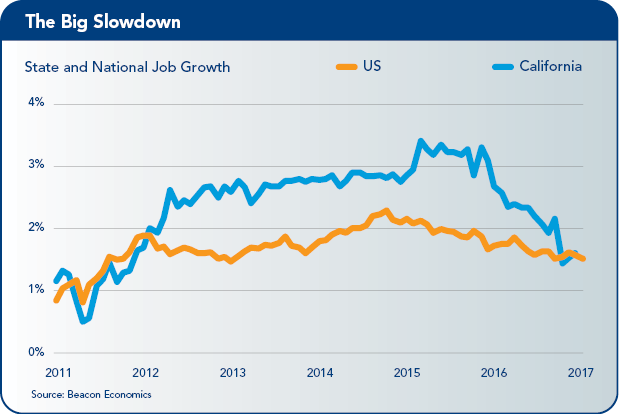 So, what accounts for the broad-based slowdown in job creation in recent months and can (or should) anything be done about it? A few things come to mind.

With the state’s unemployment rate hitting a 16-year low of 4.8% in April and the labor force participation rate stabilizing at just over 62% for now, the labor market appears to be at full employment.

So far this year, the labor force has increased by 0.8%, no different than the last five years during which California far outpaced job growth nationally.

It is worth noting that the labor force participation rates for younger individuals have been declining, a trend that is expected to continue. A reversal of this trend would represent newfound slack in the labor market.

Regardless, data on job openings at the national level suggests that a large number of positions are going unfilled, presumably because of a lack of qualified job applicants.

While comparable data for California are not readily available, the national trend very likely applies to California and is one possible limit to job growth in the state. 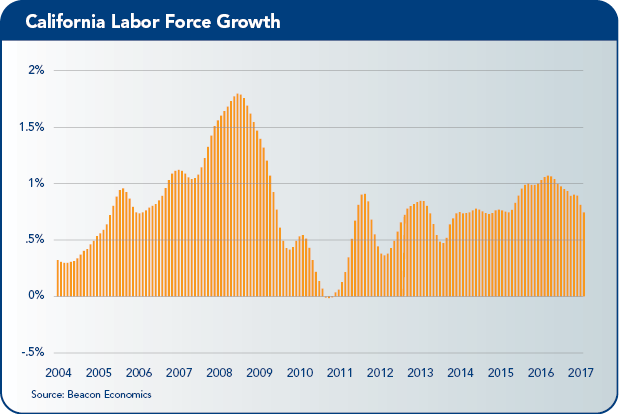 And homeownership, which slid from nearly 60% prior to the Great Recession to 53% in the second quarter of 2016, finally reversed direction and climbed to 55% in early 2017.

Stress in the owner-occupied market has spilled into the rental market, contributing to low vacancy rates and upward pressure on rents across much of the state.

Affordability problems hit low- and middle-income households hardest, and as a result, these households have left the state in larger numbers than those with higher incomes.

Arguably, housing affordability challenges are a second limit to job growth in the state, and likely exacerbate the job mismatch problem mentioned earlier.

While the notion that uncertainty can lead to inaction makes sense, it is not so easy to find hard evidence to confirm such a connection. Still, it stands to reason that firms must make plans regarding future sales, capital expenditures, and hiring, but will sit on their hands, or at best tread slowly, if their outlook for the future is cloudy for any reason.

Federal policies regarding trade, immigration, health care, and taxes are akin to the “rules of the road” for businesses and employers. Given that those rules may change under the current administration in Washington, there is every incentive to wait and see what will transpire. To the extent that this includes hiring decisions, we have yet a third limit to job growth.

But there are ways to ease these limits to growth. For one, California relies on immigrants as a key component of its labor force, like the United States as a whole. By coming up with an immigration policy that acknowledges the essential role of immigrants in the U.S. economy, California can ease its labor force constraint and add to its workforce.

For another, addressing the problem of housing affordability can slow state-to-state outmigration. At the state and local level, that means increasing supply by taking steps to enable more home construction, especially that which aligns with the state’s housing needs.

In fact, demand-side efforts to make homeownership more affordable (loan programs, interest rate subsidies, and the like) won’t ease the housing affordability problem if our communities and cities do not build more units.

As for the clouds of uncertainty that surround the current politico-economic environment, California, its communities, employers, and residents must make their way forward cautiously and hope that the clouds will clear in the coming months and years.

To be sure, Beacon Economics is NOT anticipating a recession in the near future. Rather, the state labor market has hit cruise speed, shifting into overdrive and adding jobs at a steady, if slower, pace than it experienced during the acceleration phase of the last few years.

And despite the slowdown in job growth, many signs point to continued growth in the overall economy. California will continue to outpace the nation as a whole.

Wages will rise over the foreseeable future, driving household spending. Most of the key sectors of the state economy will continue to add jobs, albeit at a slower pace.

And single-family home construction has accelerated in the last two quarters. If sustained, it will not only lead to more construction employment, but also unleash additional spending on household items such as white goods and furnishings.