Among other things, the implementing ordinance:

• Establishes a system to receive and adjudicate complaints and to order relief to cases of violations;

• Amends the remedy for violations; and 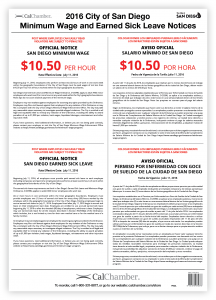 • Allow employers to cap an employee’s total accrual of sick leave at 80 hours.

• Allow employers to front load no less than 40 hours of sick leave to an employee at the beginning of each benefit year.

• Clarify the enforcement process, including a civil penalty cap for employers with no previous violations.

• Clarify language regarding the award of sick leave to be more consistent with the statewide paid sick leave law.

Once the implementing ordinance becomes effective, the required sick leave posting will also be updated.

The California Chamber of Commerce San Diego City Labor Laws poster is available for pre-order at the CalChamber Store or by calling (800) 331-8877.

As we move into the latter half of 2022, California employment law continues to move along — and employers should make sure they’re complying with the new regulations, court rulings, local ordinances and other...

How to Handle Vacation, Sick Leave, Paid Time Off, Holidays

As previously reported, on February 9, Governor Gavin Newsom signed into law SB 114, which has revived COVID-19 Supplemental Paid Sick Leave and will provide eligible employees with up to 80 hours of paid...