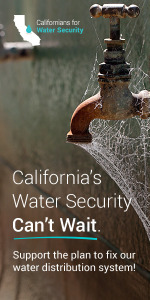 The California Chamber of Commerce and a new coalition are working to promote the Governor’s proposed fix to the state’s aging water distribution system.

As part of this effort, the coalition launched a statewide online advertising campaign that has reached millions of Californians and opinion leaders in the past few months. The coalition will continue to run advertising throughout the coming weeks and months.

The low Sierra snowpack, which usually supplies about 30% of state water needs when the snow melts in the spring and early summer, underscores the importance of improving the reliability of the water system.

While the CalChamber and voters supported Proposition 1 last November to invest in water storage and other projects, fixing the way water is distributed throughout the state is an equally important part of California’s overall water reliability plan.

“We’ve had nearly a decade of extensive scientific and environmental analysis, thoughtful engineering and preparation, and unprecedented public review and involvement. The CalChamber strongly supports this fix to our main water infrastructure and will be an active participant in the discussions to move this plan forward.”

In fact, this water distribution system supplies water to 25 million homes, millions of businesses and 3 million acres of farmland.

But key portions of this distribution system are outdated and crumbling, putting the security and reliability of California water supplies at risk. Because of environmental restrictions in the Sacramento-San Joaquin Delta, water supplies throughout the state have been cut back exponentially over the years—costing billions of dollars in lost productivity.

What’s worse, experts warn the system could collapse in an earthquake or natural disaster. Studies have shown that the dirt levees forming the waterways that transport much of the state’s water are susceptible to breaches in an earthquake, and experts predict there is a 2 in 3 chance of an earthquake hitting the Bay Area within the next 30 years that may be strong enough to damage the levees.

Furthermore, a reliable way is needed to convey water, so that the state can store it in wet years for use during droughts, and the current distribution system falls short.

The BDCP will invest in the state’s primary water delivery infrastructure:

• Improve the safety of California’s water system by fixing aging infrastructure using the most innovative technologies and engineering practices.

• Protect water supplies by delivering them through a modern water pipeline rather than relying solely on today’s deteriorating dirt levee system.

• Build a water delivery system that is able to protect water supplies from earthquakes, floods and natural disasters.

• Improve the ability to move water in wet years to water storage facilities throughout the state so we can capture it for use in dry years.

• Restoring habitat and more natural water flows above ground in rivers and streams in order to reduce impacts on endangered fish and other wildlife.

• Build a water system that can reliably deliver water to people and businesses, while also protecting water supplies for the environment, fish and wildlife.