The California Chamber of Commerce remains very concerned that the revised regulation will alarm consumers and further exacerbate the already-problematic Proposition 65 litigation climate.

The CalChamber is urging businesses to voice their concerns to OEHHA on the proposed warning changes.

OEHHA’s formal rulemaking proposal is extensive, and the CalChamber will review it thoroughly over the next several weeks.

At first glance, however, OEHHA notes in its Initial Statement of Reasons that compliance with its new regulations regarding the contents of Proposition 65 warnings will help businesses avoid litigation.

OEHHA fails to recognize, however, that under the regulations as they exist today, the vast majority of threatened or actual Proposition 65 litigation relates, not to the contents of a given warning (an issue which this regulation proposes to address), but rather to whether a warning is provided.

OEHHA’s proposal opens a new frontier of litigation over the contents of warnings when the warning may or may not be required to specify one of 12 designated chemicals, an area of litigation that doesn’t exist today.

Unfortunately, this aspect of the proposal contradicts OEHHA’s repeatedly stated goal of not increasing litigation and the Governor’s previous calls for “ending frivolous ‘shakedown’ lawsuits.”

In May 2013, noting that Proposition 65 has been abused by “unscrupulous lawyers driven by profit rather than public health,” Governor Edmund G. Brown Jr. proposed reforms to strengthen and restore the intent of Proposition 65.

Specifically, the Governor proposed to end frivolous, “shakedown” lawsuits; improve how the public is warned about dangerous chemicals; and strengthen the scientific basis for warning levels. 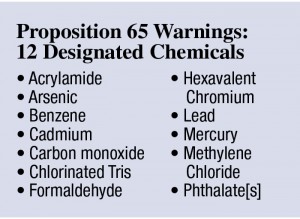 On March 7, 2014, OEHHA proposed a “pre-regulatory” draft regulation overhauling the existing requirements for “clear and reasonable” warnings under Proposition 65.

The March 7 proposal, according to OEHHA, was “designed to provide more meaningful information for individuals in Proposition 65, facilitate the public’s understanding of these warnings and make the warnings more consistent.”

OEHHA also noted that the proposal was “intended to implement the Administration’s vision concerning improving the quality of the warnings being given and providing certainty for businesses subject to the Act.”

On June 12, 2014, the CalChamber submitted an extensive comment letter, also signed by nearly 140 California-based and national organizations and businesses of varying sizes that, collectively, represented nearly every major business sector on which OEHHA’s proposal would have an impact.

The comment letter addressed virtually every provision of the OEHHA proposal, explained the basis for the coalition’s opposition, and provided recommendations where appropriate.

On September 23, 2014, OEHHA circulated a revised draft of the regulation to several stakeholders, including the CalChamber.

In an informal memorandum dated October 10, 2014, the CalChamber noted that the revised draft, while an improvement from the original draft, still contained significant flaws that undermine the Governor’s calls for reform. Additional refinements are needed to the improvements identified above, and some of the major flaws, including the requirement to specify one or more of 12 specific chemicals, are still present in the revised regulation.

The CalChamber will submit comments on the revised regulatory proposal dated January 12. Comments are due April 8.

The CalChamber is urging business to voice concerns to OEHHA on the proposed warning changes. Businesses interested in joining the CalChamber’s coalition should contact Anthony Samson, anthony.samson@calchamber.com.