An Unhealthy Dependence on the Rich

Upper-income taxpayers are paying the highest share ever of the California personal income tax.

This is good news in good times, but underscores the need for Proposition 2, the rainy day reserve measure placed on the November ballot by the Legislature at the Governor’s request.

Data recently released by the Franchise Tax Board (FTB)—with the first year of Proposition 30 tax increases in the books—shows taxpayers with more than $200,000 in tax liabilities paid a record 70% of all personal income taxes. This exceeds the previous high of 66% in 2007.

This tax burden will undoubtedly rise even higher in 2013, as the steeply progressive income tax rakes in revenues during an economic expansion.
California’s general budget has developed an unhealthy dependence on high-income Californians. With personal income taxes amounting to nearly two-thirds of all general revenues, fewer than 800,000 taxpayers will contribute more than 46% of the revenues used to support education, universities, health care, prisons, and other state programs. 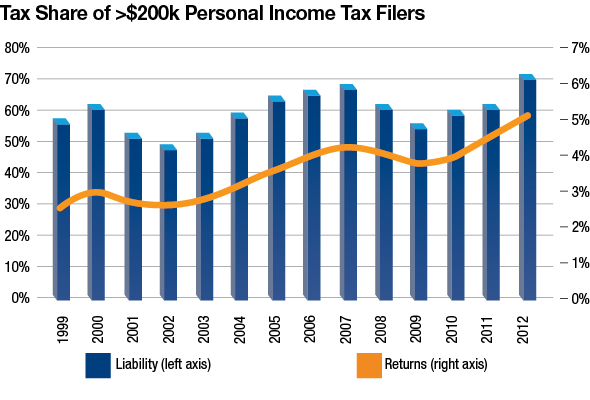 But what goes up will inevitably come down. Much of the spike in tax revenues is from a run-up of capital gains tax revenues. These revenues over-track the economy—surging in good times and collapsing during a contraction. 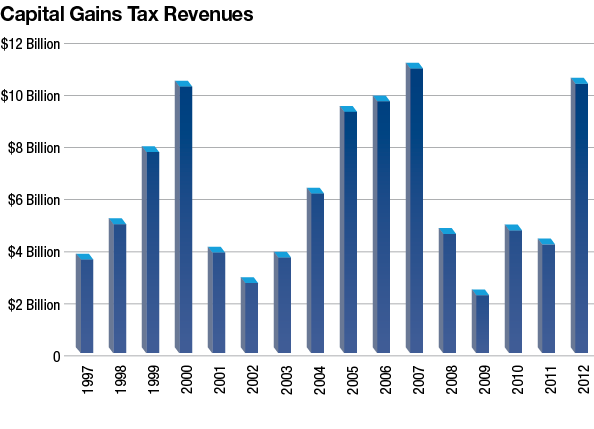 The inevitable turning of the business cycle will shrink those tax revenues. This calls for prudence, even as budget coffers fill to the brim.
A robust rainy day reserve, which socks away unanticipated taxes, is the best hedge against a return to the bad old days of budget deficits.

(Hat tip to Fred Silva at California Forward for unearthing the FTB data.)