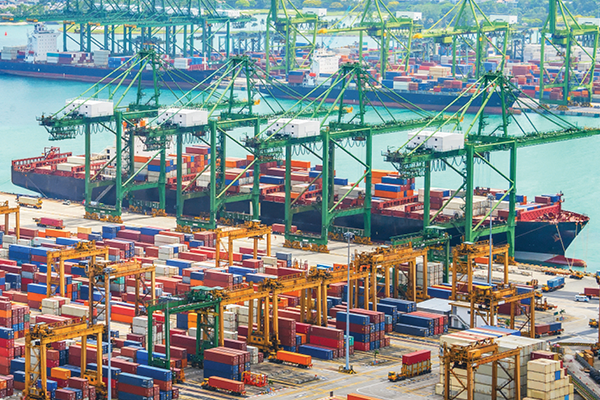 The many difficulties facing California exporters, particularly the shipping problems caused by port congestion, were the focus of a virtual meeting hosted by the California Chamber of Commerce this month.

Export shipments ranging from electronics to machinery, food stuffs, agricultural goods and more are being hampered by longstanding systemic issues at the ports. The causes of port congestion have been exacerbated by the pandemic.

The featured speaker was Commissioner Carl Bentzel of the Federal Maritime Commission (FMC). Bentzel has many years of experience on maritime transportation issues and played a major role in crafting the laws governing port security and ocean shipping.

Following the May 12 meeting, the chairs of the five California District Export Councils sent a letter asking the FMC to take immediate action to support U.S. exporters and create a more level playing field for producers of California agricultural products and other goods and products being exported to the world.

In addition, limitations of the appointment system have made it increasingly difficult for shippers to efficiently pick up and drop off containers during the allotted free time or to conduct dual transactions (picking up and dropping off different shipments on the same trip). The inefficiencies have resulted in increased drayage costs, unreasonable detentions and disproportionate demurrage costs.

Other notable systemic issues include carrier practices having to do with how vessels are loaded and unloaded, and the lack of load planning. In addition, carrier practices are causing importers to incur massive assessments for demurrage, detention and similar storage charges, even when loaded containers are not made available for pick up or empties cannot be returned once unloaded within the free time allotted.

For exporters, the problem is even worse as the carriers have chosen to ship empty containers back to Asia, having decided the revenue from reloading the empties at the point of origin and returning them loaded to the United States produces greater revenue than allowing U.S. exporters to ship their goods to export markets.

West Coast agricultural processors have been charged tens of thousands of dollars in fees as a result of re-booking and storing containers, according to Roger Isom, president and CEO of the California Cotton Ginners and Growers Association and the West Coast Agricultural Processors Association.

Last May, the FMC released recommendations to carriers that were intended to alleviate port congestion. When those recommendations were ignored, the FMC approved a Supplemental Order on November 20, 2020, expanding its investigation of ocean carriers calling at U.S. ports.

That effort appears focused strictly on empty containers being shipped to points of origin and ignores the massive assessments by the carriers, even though the carriers are the cause of these conditions. These huge assessments are devastating to small and medium-sized businesses.

Carriers also are deciding the value of individual customers and whether to waive some or all of these assessments without any transparency or accountability.

Many economists and port operators predict the current supply chain disruption in California will end by summer and that congestion will ease in time for the 2021 peak season.

Most producers, however, expect congestion to return in the fall, during harvest season, which is also the peak season for imports. Until the systemic issues are addressed, producers predict that port congestion difficulties will continue to ebb and flow.

Although some systemic issues are best addressed at the local level with stakeholders collaborating to identify workable solutions, until the ports, carriers and terminals participate in a meaningful manner, long-term solutions will remain elusive. The pandemic made things worse, but it is not the sole or even the primary cause of the current congestion.

The prospect that California exporters may face yet another year of congestion at ports during the 2021 harvest season underscores the need for immediate action, especially due to the carriers’ practice of bypassing U.S. exporters in favor of shippers located in other parts of the world whose cargo the carriers see as a more valuable revenue source.

The California District Export Councils concluded their letter with a request for the FMC to expedite its current investigation of the shipment of empty containers at the expense of U.S. exporters to the extent permitted by its procedural rules. The council chairs asked the FMC to make its findings mandatory for ocean carriers rather than discretionary.

The councils also urged the FMC to recognize the many more significant long-term causes of the current port congestion challenge, and expand its inquiry accordingly.

Previous article
Online Options Available with Department of Motor Vehicles
Next article
New Deputies at World Trade Organization Include 1 from U.S.; 2 of 4 Are Women