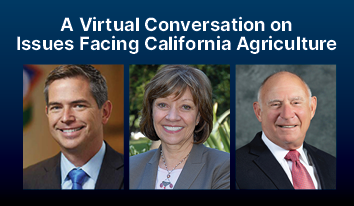 The virtual event, “A Conversation on Issues Facing California Agriculture,” was held on May 10 and was moderated by President and CEO of Blue Diamond Growers, and CalChamber Immediate Past Chair Mark Jansen.

In kicking off the event, Jansen announced that the CalChamber’s Agriculture Committee is being reformed as the Food and Agriculture Committee in order to focus on policy related to issues from the entire food process — from growing and distributing to transportation, packaging, retail and exports. The committee will be chaired by Chuck Ahlem, owner and operator of Hilmar Cheese Company, and Melissa Frank, senior counsel/director of government affairs for The Wonderful Company, will serve as vice chair.

Below is a brief overview of the topics that were discussed with Secretary Ross. A recording of the event is available at www.calchamber.com/webinars/20210510-CA-agriculture-issues.

Drought is being declared in more counties of the state, but this drought will be the first to be concurrent with the full implementation of the Sustainable Groundwater Management Act (SGMA), which brings a whole new set of tensions and concerns about how the state will manage this drought, Ross told Jansen.

Current estimates by experts indicate that at minimum, 500,000 acres will likely be fallowed this year, she says. The Governor’s May budget revise contains opportunities for ground basin recharge and repairs to the state’s conveyance structures. Ross stressed that now is the time to think of smart and strategic ways to repurpose land in ways that will help with carbon capture and restore groundwater supply while generating revenue for crops that won’t be planted because of the drought.

Many of the water storage programs are long-term ones, which look at both above ground storage and underground storage. Ross points out that while 40 million acre-feet of water can be stored above ground, 400 million acre-feet of water can be stored underground. But we still need to figure out not just how to store the water underground, but also how to bring it back up so that it can be used in times of need, she said.

Even the time at which water is captured needs to be strategic. Ross explains that capturing snow runoff will be different than capturing rain from atmospheric rivers.

Research done at the U.S. Department of Agriculture has highlighted the importance of maintaining healthy soils. Healthy soils, Ross explains, capture carbon from the air and draw it into the root system, which increases soil productivity and water holding capacity, and improves nutrient cycling and biodiversity.

In fact, there is currently a global movement made up of farmers and ranchers that is focusing on climate solutions, she said. For example, one way some farmers contribute to carbon capturing is by cutting down orchard trees and reworking the ground-up tree material into the soil.

The economic recovery from the COVID-19 pandemic will be a bumpy ride and the Federal Reserve Bank will be critical of the rate of inflation, Ross said.

She pointed out that a recent news segment on TV showed how significantly consumer product prices have increased.

Ross also highlighted the fact that despite momentary disruptions during the pandemic, food was delivered on time for the most part. Produce and milk were consistently on the grocery store shelves each morning, even when non-food products, such as toilet paper, were not.

What we are seeing now are new challenges in the supply chain, Jansen said.

Farmers are waiting weeks for equipment when they previously had to wait only a few days, Ross said.

President Joe Biden’s infrastructure package can help with the modernization of ports, but a shared vision is going to be required to really address how we move goods. As an example, Ross said, we need to think about how our coastal ports should interact with our inland ports.

We should consider how we get goods to where people are — just look at the number of trucks that drive from Southern California in order to get products to the Bay Area, Ross pointed out. We also have a huge opportunity to think of ways to create logistical spaces in the Central Valley, and in so doing, achieve climate goals, improve local economies, and distribute goods faster.

There has been much talk about labor supply constraints and one of the most immediate areas facing shortages is the trucking industry, especially in seasonal and short-term hauling, Ross said. It is critical to consider the potential of gas shortages. In particular, it is important to ensure that there are enough drivers to transport oil.

Labor shortages also are affecting the cherry-picking season. Currently, only 70% of jobs in the cherry industry are being filled, and we are nearing the peak of the cherry season, Ross said. Officials are trying to figure out the reason behind the shortage, whether it is due to fears of contracting COVID-19 or whether higher wages are being offered elsewhere.

These shortages strengthen the case for a comprehensive immigration reform package. While some people fear that immigrants take jobs away, the fact remains that people are not raising their kids to be farmworkers, Ross said.

Moreover, she pointed out that people are still required to operate, program and maintain equipment, so if we invest in automation without investing in workforce development, we will still end up being short of people.