So far, the California Chamber of Commerce has taken positions on six of the 12 propositions that will appear on the November ballot.

Below is a recap of those positions.

Other measures will be considered when the CalChamber Board meets in September.

Sponsored by the California Association of Realtors, the People’s Initiative to Protect Proposition 13 Savings allows homeowners over age 55 to transfer their property tax basis to a replacement residence anywhere in the state.

The proposition will repeal the CalChamber-supported transportation taxes adopted by the Legislature in 2017 (SB 1), including higher gasoline and diesel excise taxes, a new tax on vehicles and a new tax on zero-emission vehicles. Passage of Proposition 6 will reduce spending on state and local transportation projects by nearly $5 billion a year, eliminating funds already flowing to cities and counties to fix potholes, make safety improvements, ease traffic congestion, upgrade bridges and improve public transportation.

The United Healthcare Workers is the sponsor of this attempt to set price controls for privately operated kidney dialysis treatment. The measure is intended to create leverage on dialysis clinics to unionize their staff. Its passage will increase costs by shifting dialysis treatments from clinics to more expensive venues, such as emergency rooms or hospitals.

Misnamed by its tenant advocate supporters as the “Affordable Housing Act,” the measure proposes to repeal the Costa-Hawkins Rental Housing Act of 1995, which placed limits on locally enacted rent control laws. The measure is sponsored by the president of the Los Angeles AIDS Healthcare Foundation.

Still to be considered by the CalChamber Board are:

• Proposition 2: Asks voters to ratify the use of revenues being generated by the so-called millionaire’s tax approved in 2004 for county mental health programs for permanent housing for the homeless in advance of a $2 billion bond for that purpose. 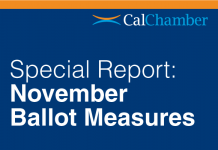