California exports of more than $5.6 billion are the targets of retaliatory tariffs from major trading partners in response to new U.S. tariffs on imported goods, according to an analysis released July 2 by the U.S. Chamber of Commerce.

China, the European Union, Mexico and Canada have already retaliated or announced plans to retaliate with billions of dollars in tariffs on U.S.-made products.

The California Chamber of Commerce is concerned over the impact that U.S.-imposed tariffs could have on international trade and the state’s economy. Increasing tariffs will have adverse consequences and fails to consider the impact on our allies and trading partners.

The U.S. Chamber analysis was compiled using data on state exports from the U.S. Department of Commerce and data on U.S. exports subject to foreign tariffs from the official government sources of China, the EU, Mexico and Canada.

Although trade is a nationally determined policy issue, its impact on California is immense. California exports to more than 225 foreign markets.

Raising tariffs can result in higher prices to the consumer for the specific product protected and in limited choices of products for consumers. Further, it can cause a net loss of jobs in related industries, retaliation by U.S. and California trading partners, and violates the spirit of our trade agreements.

The U.S. Chamber analysis found that:

• $562 million in California exports to Canada are targeted for retaliation.

• $699 million in California exports to Mexico are targeted for retaliation.

• $4 billion in California exports to China are targeted for retaliation.

• $383 million in California exports to the EU are targeted for retaliation. 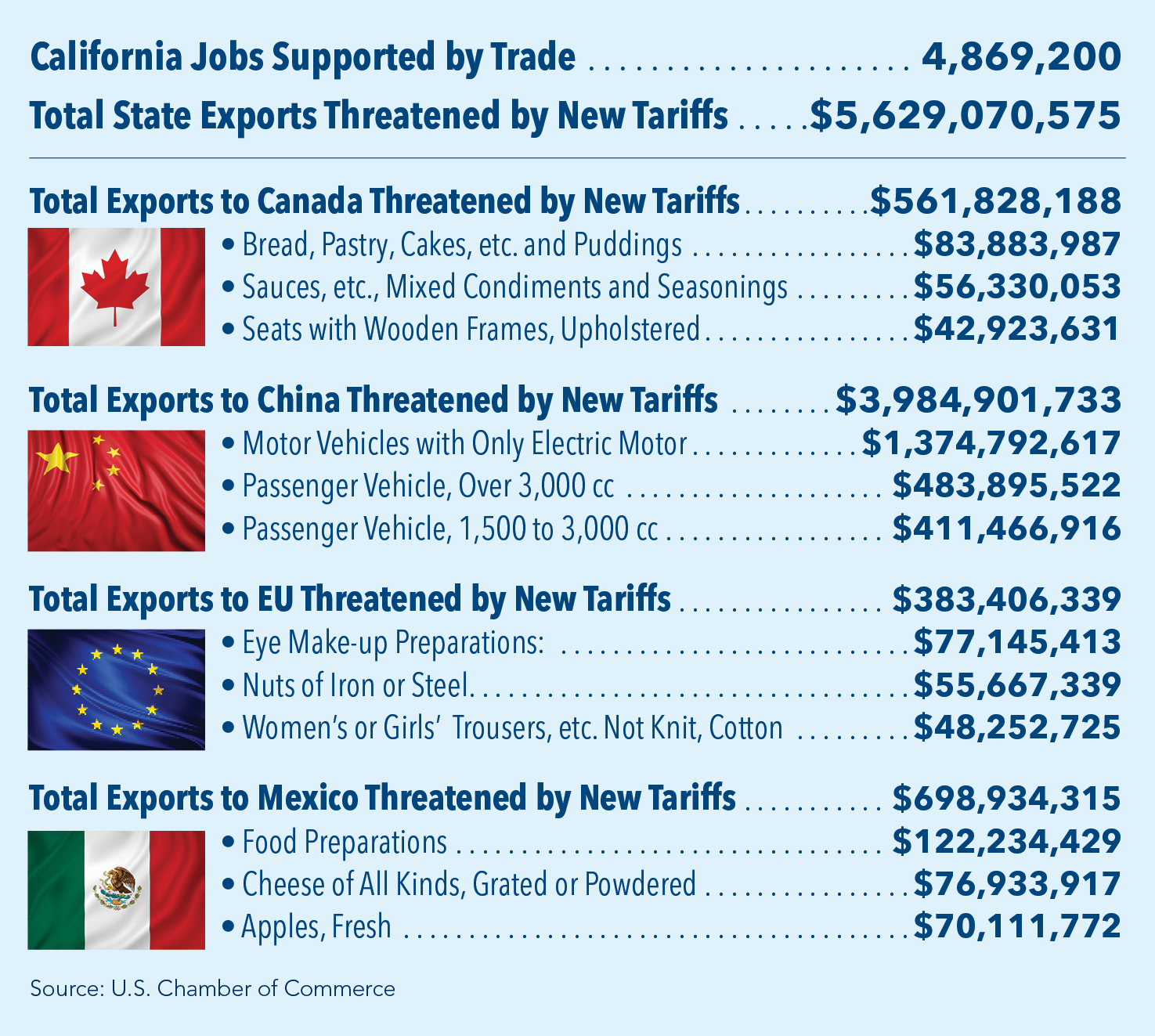 The CalChamber continues to pursue a free trade-based agenda in 2018. CalChamber has long supported free trade worldwide, expansion of international trade and investment, fair and equitable market access for California products abroad, and elimination of disincentives that impede the international competitiveness of California business.

According to a California state government international trade and investment study, “International trade and investment is a major economic engine for the state of California that broadly benefits businesses, communities, consumers and state government… California’s economy is more diversified than ever before, and the state’s prosperity is tied to exports and imports of both goods and services by California-based companies, to exports and imports through California’s transportation gateways, and to inflows and outflows of human and capital resources.”

Trade offers the opportunity to expand the role of California’s exports. In its broadest terms, trade can literally feed the world and raise the living standards of those around us.

The analysis is available online at www.thewrongapproach.com. State-specific fact sheets are available for download, as is the full U.S. data set.

The United States and the United Kingdom resumed trade talks at the end of March, two years after they were frozen and eight months after the U.K.’s “fast track” status to a trade deal,...

Trade statistics released this month by the U.S. Department of Commerce show that California remained a top trading state in 2021. California exported $175.12 billion worth of goods to the world in 2021. As usual,...