The funding boost proposed in the state budget plan for the coming year will help the judicial branch continue reforms to provide access and fairness to court users, California Chief Justice Tani G. Cantil-Sakauye told lawmakers in her State of the Judiciary address on March 20.

After years of funding cuts, the 2018–2019 state budget proposed by Governor Edmund G. Brown Jr. grants the state’s judiciary an additional $150 million for critical trial court operations and commits to funding construction for 10 new courthouse projects in the next two years.

Due to limited resources in past years, the judicial branch focused primarily on criminal matters and civil court services took a “back seat,” greatly delaying civil dockets, Cantil-Sakauye said.

Thanks to the proposed $123 million in increased funding, the Chief Justice said, the trial courts will have the flexibility to restore services and resolve the backlog of cases in a timelier manner.

• The first tier of the initiative will restore courthouses to their full operating hours and staff, with fair compensation.

• The second tier will provide additional funding for self-represented litigants, technology and traffic, and language access.

• The final tier will develop and employ “legal Wayfinders.”

Legal Wayfinders, the Chief Justice said, are people who can personally assist people who come to court without an attorney. A legal Wayfinder can meet and guide people to the appropriate window, courtroom/courthouse, and could explain consequences and procedures. A legal Wayfinder could even help people find and fill out forms, and get the form filed in the correct place. These services could be provided on a one-on-one basis or in a workshop setting.

Future of Justice in California

In the address, Cantil-Sakauye also highlighted some of the recommendations set forth by the Futures Commission. The Commission, comprised of 64 members and formed by the Chief Justice, was asked to “question the past, present, and future and to make recommendations on how [to] go forward with the future of justice in California.”

After two years of work, the Commission submitted recommendations. Three of the recommendations were referenced in the Governor’s proposed budget, the Chief Justice said:

• Expand self-represented litigant services with $19 million in funding, as more than 4 million Californians go to court without a lawyer and three-fourths of civil cases have at least one party without an attorney;

• A $3.4 million investment to support the judiciary’s efforts to initiate a tech-based traffic system; and

To view the State of Judiciary address or read a transcript of the address, visit newsroom.courts.ca.gov. 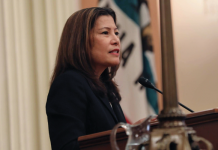