Proposition 65, the Safe Drinking Water and Toxic Enforcement Act of 1986, is the most far-reaching consumer “right to know” law in the nation. Although Proposition 65 prohibits listed chemicals from being discharged into sources of drinking water, the law is best known for its broadly crafted warning requirement.

Specifically, Proposition 65 requires businesses with 10 or more employees to provide a clear and reasonable warning before knowingly and intentionally exposing individuals to chemicals that the State of California, through the Office of Environmental Health Hazard Assessment (OEHHA), has determined cause cancer and/or reproductive toxicity.

The warning requirement applies to all products sold in California, even if they are manufactured in a different state or country. Since Proposition 65 was enacted, the list of chemicals has grown exponentially to approximately 950 chemicals, making Proposition 65 a consideration—and in many ways a significant burden—for companies in virtually every industry sector. 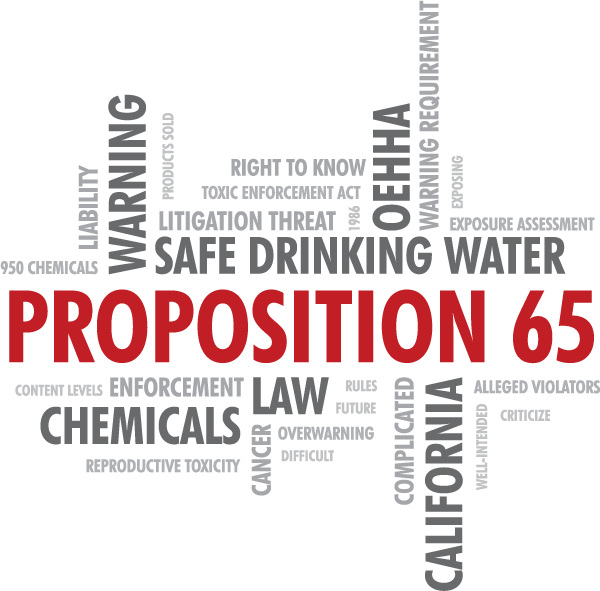 The original intent of Proposition 65 as a consumer “right to know” law has been overshadowed by provisions built in the statute, as well as subsequent regulatory developments, which together have prompted many both within and outside of the business community to criticize Proposition 65 as a well-intended law that, over time, has been utilized less by the consumer to make informed choices, and more by opportunistic private enforcers solely for personal financial gain.

Proposition 65 contains a private right of action provision that allows private persons or organizations to bring actions against alleged violators of Proposition 65 “in the public interest.” This provision, combined with the extraordinarily low bar private enforcers must meet to bring suit, has resulted in an extremely active enforcement climate.

On average, private enforcers collectively serve almost three Notices of Intent to sue per day. In 2015 alone, there were 582 in-court settlements (out-of-court settlements are not included in the California Attorney General’s publicly available annual settlement report) totaling $26,226,761, of which $17,828,941, or nearly 70%, went into the pockets of plaintiff’s attorneys.

The aggressive enforcement climate under Proposition 65 is due in large part to the fact that determining when a warning is required under the law with scientific certainty is nearly impossible, making businesses vulnerable to challenge even when they elect not to provide a warning after conducting their legal and scientific due diligence.

This is because “safe harbor” levels set by OEHHA (i.e., levels above which warnings are required to be provided) are expressed in terms of amounts of exposure to a chemical per day and not in terms of the amount of a chemical found in a product or facility.

Determining exposure levels is far more complicated than determining content levels. To do this, a business may need to engage experts to undertake this complex and expensive analysis, also known as an exposure assessment. Businesses that elect not to warn on the basis of an exposure assessment which concludes that no warning is required are nonetheless still at risk of being challenged by a private enforcer who argues that a warning is required based on competing science.

Private enforcers typically dispute a business’s exposure assessment concluding no warning is required. Accordingly, the practical reality facing businesses in today’s Proposition 65 climate is that they must either warn—even if such warning is not required by law—or be sued.

When faced with this rather vexing reality, businesses often choose to provide a warning instead of risking a lawsuit because Proposition 65 statutorily places the legal burden on the business to prove that no warning is required, a burden which makes defending Proposition 65 cases expensive.

Rather than risk being embroiled in litigation involving a battle of the experts at trial, businesses often will instead elect to voluntarily provide a warning out of an abundance of caution in order to shield themselves from the inevitable threat of litigation that would otherwise exist if they did not warn.

These types of prophylactic warnings have contributed to the oft-criticized “overwarning” problem under Proposition 65, wherein many Proposition 65 warnings are provided to shield off a legal challenge rather than to warn consumers of actual chemical exposures.

Despite being a criticized practice, overwarning often is the right business decision because it has historically been an extremely safe course of action from a liability standpoint.

Liability for Not Warning

Since Proposition 65 was enacted more than 30 years ago, legal challenges brought under the law have almost solely and exclusively challenged a business’s decision not to warn. Plaintiffs have rarely challenged the contents of a provided warning, in great part because the longstanding regulations regarding what constitutes a “clear and reasonable” warning have been relatively straightforward and thus, businesses that provide warnings are less susceptible to legal challenges.

OEHHA’s recent regulatory update to its “clear and reasonable” warning regulations is likely to open up an entirely new type of challenge under Proposition 65 wherein the contents of a warning are challenged as being inadequate. This regulatory development, combined with other developments and recent chemical listings, are likely to make compliance with Proposition 65 more difficult in the future and will almost certainly result in increased enforcement activity under the law.

For more information, read the full article on Proposition 65 in the California Chamber of Commerce 2017 Business Issues and Legislative Guide.