Energy independence and security were subjects of interest when several Ukrainian delegates visited the California Chamber of Commerce on March 14.

Leading the group was Nataliya Katser-Buchkovska, a member of the Ukrainian Parliament and the Head of the Subcommittee on Sustainable Development, Strategy and Investments of the Committee on Energy, Nuclear Policy and Security.

Ukraine has a population of approximately 45 million and is the second largest country in Europe by land mass. On a broader scale, the European Union-Ukraine Deep and Comprehensive Free Trade Area, which finally started up on January 1, 2016, is expected to help Ukraine integrate its economy with Europe by opening up markets and harmonizing regulations.

In 2016, California imported $33 million from Ukraine, including food manufactures, nonelectrical machinery, and fish. There are approximately 200,000 persons of Ukrainian descent living in California. 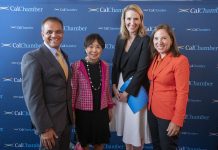