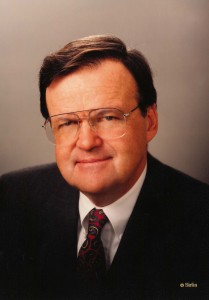 Kirk West, longtime California business leader and confidante to governors, passed away on June 2 after battling cancer. He was 79.

For two decades Kirk was the leading voice for business in California—as a strategist and spokesman for the California business community, and as an influential voice inside government.

Between those stints, Kirk served in the Cabinet of Governor George Deukmejian as secretary of the state Business, Transportation and Housing Agency.

“Kirk was a special person,” said CalChamber President and CEO Allan Zaremberg. “He showed us all that being gracious, humble and respectful is the perfect recipe for success.”

Zaremberg recalled that Kirk was far from a micromanager: “Soon after I joined the Chamber, I found that we were right in the middle of a dispute between Governor Wilson and Speaker Willie Brown. I sought Kirk’s sage counsel and direction. After several minutes of deep thought, he wheeled around in his chair and announced, ‘That’s why I hired you!’’’

Kirk led the California business community to new levels of political sophistication and influence. He not only helped broker legislative deals on workers’ compensation, civil liability, and transportation finance, but also established the infrastructure for and oversaw multimillion-dollar efforts to turn back anti-business ballot initiatives to raise taxes or increase regulation.

Kirk graduated from Stanford University in 1958 and earned a master’s degree in political science in 1962 from the University of California, Berkeley.

He began his political career in Sacramento in the early 1960s on the staff of Assemblyman Don Mulford, the Republican Caucus chairman, and later worked for Minority Leader Bob Monagan. Kirk also worked as a deputy director of the Department of Finance under Governor Ronald Reagan until being recruited as chief deputy state controller under Houston Flournoy.

In a recent tribute, former Governor Pete Wilson reflected on a long-ago conversation with Kirk as Wilson considered a run for Assembly: “I remember vividly and gratefully the Saturday morning in Sacramento when you dispensed not only practical wisdom about how to win and then make a useful difference in the Assembly, but also the hilarious observations and impressions you provided of some of the more pompous and self-important senior members of both parties.”

Kirk was born of Christian missionary parents, Dr. Donald Kirkland West and Dr. Helen Fraser West, in China in 1937. He would proudly regale listeners that “I was the largest baby born in Shangdong Province in 1937.” Nobody who knew Kirk would doubt that claim. On a trade mission to China in 1988, Kirk arranged a reunion with his childhood nanny (“my Amah”), to his everlasting delight.

Kirk was mentor to generations of Sacramento policy and political professionals. He led by example, and was generous in delegating responsibilities and spreading credit. He approached his work as he did his golf game, with humor and humility.

(6/12/2016 Update): A Celebration of Life is set for Saturday, July 9, 2 p.m., at Northridge Country Club, 7600 Madison Avenue, Fair Oaks. Donations in Kirk’s name may be sent to his favorite charitable group, the Orangevale Food Bank, P.O. Box 2693, Orangevale, CA 95662. He hated the thought of anyone being hungry after witnessing starvation while growing up in China.

The California business community mourns the recent loss of two policy leaders. • Kirk Clark, executive vice president of the California Business Roundtable, passed away on June 12. He was a captain in the Naval...

John F. Llewellyn, a member of the California Chamber of Commerce Board of Directors for 31 years and chairman of Forest Lawn Memorial-Parks & Mortuaries, passed away on April 6. He was 74. Llewellyn joined...

Tom C. Stickel, 2002 chair of the California Chamber of Commerce Board of Directors, passed away March 6 at the age of 71.