Californians have reduced water use by 27.1% since emergency conservation rules took effect in June, according to state officials.

Governor Edmund G. Brown Jr. mandated a 25% reduction in water use for cities and towns in an April 1 executive order.

The State Water Resources Control Board said the statewide conservation rate was 22.2% in October, down from 26.4% in September. Even so, average statewide water use declined from 97 gallons per person per day in September to 87 in October.

State water officials attributed the slight drop off in savings to the above-average temperatures in October and noted that the last five months have been the hottest on record.

The state goal was to save 1.2 million acre-feet of water from June 2015 through the end of February 2016. The cumulative savings through October equals 913,851 acre-feet (297.8 billion gallons), 76% of the goal, according to the state water board. 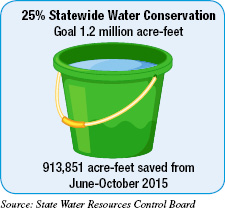