CalChamber Board Member Crafts Song/Video to Inspire Gift to Veterans 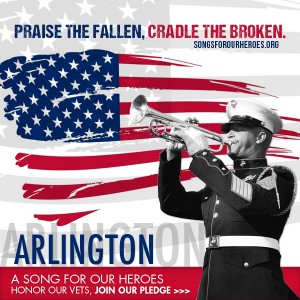 Attorney George David Kieffer, a member of the California Chamber of Commerce Board of Directors, has composed and directed a song and video to honor the nation’s veterans and raise funds for veterans organizations.

“Arlington,” the song and video package, was released on multiple digital platforms this month and features the Los Angeles Master Chorale.

The video can be previewed and pledges made at SongsForOurHeroes.org.

‘All in This Together’

Kieffer wrote the music and produced a video for Arlington after visiting the U.S. memorial in Normandy, France, where more than 9,300 American soldiers are interred, and after reading stories of today’s returning vets. He later added the lyrics at the suggestion of a colleague.

“I hope this song moves people as I was moved,” said Kieffer. “I want them to know their donations can make a difference.”

All proceeds from the release of the song and video will be distributed to veterans organizations through the Land Of The Free Foundation. The release of a full album is planned for this Veterans Day, November 11.

Kieffer is a partner at Manatt, Phelps & Phillips, LLP, and has been a member of the CalChamber Board since 1996.

In 2010, the Los Angeles and San Francisco Daily Journals named him as one of the “Top 100” attorneys in California. He has regularly been listed in The Best Lawyers in America.

An adviser to both business and elected leaders, Kieffer has been recognized for his public service by numerous civic organizations, including the Urban League, the Coro Foundation and the Pat Brown Institute. He was a principal co-author of the new Los Angeles City Charter, adopted in 1999—the first full revision since 1923. He served two terms as chair of the Los Angeles Area Chamber of Commerce and chairs the Los Angeles Civic Alliance.

A history graduate of the University of California, Santa Barbara, Kieffer is a member of the UC Board of Regents. He earned his law degree from UCLA.

Kieffer is a published author and songwriter, who has been composing songs since his youth.

A California Chamber of Commerce-supported proposal to issue state general obligation bonds to fund water supply and infrastructure projects was behind in the vote count as Alert went to print, but other bond measures...

CalChamber Board Takes Closer Look at Campaigns Across Nation