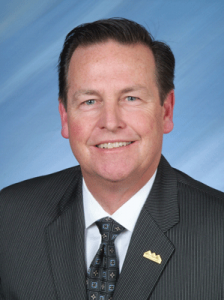 “We’re looking forward to having Steve as our representative in this important region of our state,” said Dave Kilby, CalChamber executive vice president, corporate affairs.

“He’ll not only be the face of CalChamber, but will be our eyes and ears generating feedback from area businesses directly to our team in Sacramento. With Steve’s experience and knowledge of the business community, he’s the perfect person to join our team.”

In the new CalChamber position, Van Dorn will be responsible for increasing connections and improving relations with business leaders in the region, working to increase engagement with existing member companies and recruiting new CalChamber members.

He served on the CalChamber Board of Directors in 2013 and 2014 as the representative of the Western Association of Chamber Executives during his terms as chairman-elect and chairman.

Van Dorn has led the Santa Clara Chamber staff since November 2002, when he was named to the position after serving as director of sales and marketing for the organization.

He began his hospitality career in 1984 in sales for three hotels with the Hilton Hotels Corporation, moving on to sales positions with the Los Angeles and San Jose convention and visitors bureaus before joining the Santa Clara Chamber.

He earned a B.S. in business management from San Diego State University.