The latest winter survey finding a “scant snowpack” and subsequent prediction that California’s drought will continue for the fourth consecutive year underline the state’s need for water storage and conveyance facilities.

Storage allows California to capture water in wet years to convey it where needed during dry times. In addition, storage enables the state to control water flow and temperature to maintain adequate fresh water in the Sacramento-San Joaquin Delta for farmlands and the benefit of fish species.

A dry January, normally the wettest month, plus warmer-than-average temperatures resulted in a snowpack of just 25% of the historic average for this time of year on January 29, according to the state Department of Water Resources (DWR). Near Echo Summit, about 90 miles east of Sacramento, the snow water equivalent was just 2.3 inches—12% of the long-term average at that location. 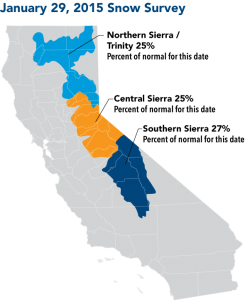 Although weather forecasts showed a storm front crossing the state late this week, the precipitation was expected to be too warm to contribute significantly to the snowpack. In normal years, the snowpack supplies about 30% of California water needs as it melts in the spring and early summer, according to DWR.

For the beginning of a drought recovery, DWR managers have said heavy precipitation and cooler temperatures in the next three months would be required for the snowpack to build.

State climatologist Michael Anderson has said ending the drought would require precipitation at least 150% of normal by the end of the water year in September—75 inches on DWR’s eight-station index. As of the end of January, the stations had recorded only 23.1 inches.

Both surface and groundwater storage are essential for a more secure water supply. Overwhelming voter approval of Proposition 1, the California Chamber of Commerce-supported water bond that contains funding for surface water storage, reflects Californians’ concern over diminishing supplies and acknowledgement that current supplies are insufficient.

A map of electronic snowpack readings is available at http://cdec.water.ca.gov/cdecapp/snowapp/sweq.action.

Reservoir conditions are available at http://cdec.water.ca.gov/cdecapp/resapp/getResGraphsMain.action.