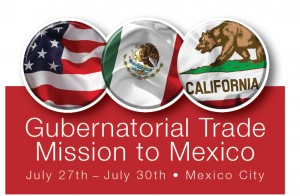 Governor Edmund G. Brown Jr. returned this week from a successful four-day mission to Mexico, organized by the California Chamber of Commerce with the help of the California Foundation for Commerce and Education.

The July 27–30 mission was a reminder of the longstanding historical, cultural and commercial ties between California and Mexico, the state’s largest export partner.

The Governor’s schedule included high-level meetings with government officials, including Mexico President Enrique Peña Nieto, the Mexico Secretary of Foreign Affairs and representatives of the ministries of environment and natural resources, education, energy and economy.

The diverse delegation also included members of the Governor’s Cabinet, legislators, and business, economic development, investment and policy leaders.
Full coverage of the daily activities of business delegates, including photos and news links, appears on the CalChamber blog site at http://california-mexicomission.calchamber.com.

As Zaremberg noted in an interview preceding the mission, the trip “lays the foundation for improving economic ties and trade with Mexico, developing a better relationship that will help foster the movement of goods and benefit California’s economy and jobs.” Its success, he added, “will benefit California’s employers and the ability…to generate more opportunities for California goods, produce and tourism back to California.”

On Monday, the first full day of the mission, Governor Brown and Mexico environmental officials signed a memorandum of understanding (MOU) to combat climate change. The MOU lists a range of joint activities to reduce greenhouse gases, collaborate on strategies to respond to fires along the border, improve air quality and expand markets for clean energy strategies, and strengthen fuel and truck efficiency standards and support green freight initiatives.

A campaign to promote travel to California from Mexico was announced by Visit California and Aeromexico and also unveiled on July 28.

Caroline Beteta, president and CEO of Visit California, briefed the delegation on the program and played a few of the promotional videos that Visit California has created to market California as a top destination to visitors. Even though tourism is a service, it still is considered an export and is factored into the state’s gross domestic product (GDP). Every year, travelers pump nearly $110 billion into California’s economy.

Air travel is the key target of Visit California’s marketing, as air travelers spend three times as much money as ground transportation travelers do. The average Mexican air traveler will spend the equivalent value of 500 pounds of exported almonds, according to Beteta.

A highlight of Tuesday, July 29, was the signing of an agreement to foster cross-border cooperation on education efforts, including online learning, student and teacher exchanges, and joint research.

Before signing the MOU, the Governor said he would like to make sure that we advance online learning, but acknowledged that it is still in a very “embryonic stage.” He said he would like to see the day when a student could take a course in Mexico and still get full credit at Cal State, all campuses of the University of California system, and California community colleges.

This scenario is inevitable, the Governor said, but the time frame in which this can be achieved is what is not certain. It depends on how well lawmakers can translate collaboration into real facts on the ground, he said.

The final day of the mission, Wednesday, July 30, included the Governor signing an MOU with Mexico’s Ministry of Economy to expand trade and investment between businesses in Mexico and California.

Many trade mission delegates were among the approximately 120 luncheon attendees.

At the luncheon, Governor Brown provided a brief history of California-Mexico relations, commenting, “Mexico and California have been joined from the beginning…Our roots go back even deeper than the Pilgrim fathers.”

Dr. Meade reinforced the Governor’s observation and summarized what delegates on the upcoming gubernatorial trade mission would find upon their arrival in Mexico:

Bilateral trade between the United States and Mexico is “amongst the most integrated in all the world,” Dr. Meade commented, and Mexico is the first trading partner to 22 states, including California.

The California-Mexico border—145 miles with seven crossing points—“is arguably the busiest land border crossing in all the world,” Dr. Meade said. He called for more partnerships such as the proposal to connect the San Diego and Tijuana International Airports so that Tijuana can help with the overflow from San Diego.“We should be recognizing that our border is a source of competitiveness and our border is part of the way of life of the region,” he said.
Accompanying Dr. Meade to the luncheon were Mexico’s Ambassador to the United States Eduardo Medina Mora Icaza; Undersecretary for Foreign Affairs in North America Sergio M. Acocer Martinez de Castro; and Consul General of Mexico in Sacramento Ambassador Carlos González Gutiérrez.

Over the years, CalChamber delegations have participated in the state’s trade and investment missions to Tokyo, London, Mexico City, Frankfurt, Hong Kong, Taipei and Johannesburg.

In keeping with long-standing policy, the CalChamber supports free trade worldwide. The CalChamber encourages the expansion of trade and investment, fair and equitable market access for California products aboard and the elimination of disincentives that impede the international competiveness of California businesses.

The future of the bilateral relationship between California and Mexico was the focus this week at a luncheon hosted by the California Chamber of Commerce in conjunction with the Consulate General of Mexico in...