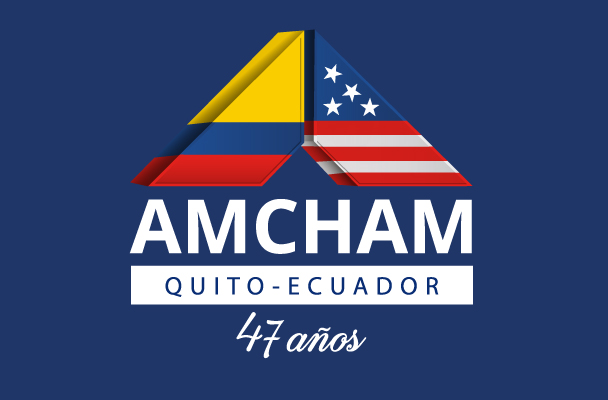 Please tell us a bit about the American Chamber of Commerce in Ecuador, services you provide and activities.

AmCham Ecuador is a not-for-profit that started its operation in 1974, oriented to the growth of the U.S.-Ecuador relationship. In its origin it was mainly involved with trading issues and support for American companies that were investing in our country.

The chamber has evolved through the years, providing new services, and as the relationship between our two countries evolved. Those comprise not only trade, but also rule of law, trade facilitation, anti-corruption and compliance issues, as well as close collaboration with the Ecuadorian Embassy in Washington D.C. and the American Embassy in Quito, on several other topics of interest, such as antidrug efforts, national and regional security and cooperation.

Our chamber has around 250 members and their business amounts to around 17% of the Ecuadorian gross domestic product (GDP).

Ecuador is a small country, located in the northwestern part of South America between Colombia and Peru. The equatorial line crosses it from east to west, providing spring-like weather all year long, although three different regions are formed with the mountain ranges that cross from north to south.

The country´s main income has been oil, but an effort to increase and diversify exports has been in place for several years. Such effort has resulted in significant exports of bananas, shrimp, fish products, flowers and frozen broccoli, among others. Ecuador is the No. 1 bananas and shrimp exporter in the world.

The United States has, for several years, been our main trading partner. Around 23% of Ecuador´s non-oil exports go to the United States. This is a very interesting fact, because the range of exports go beyond those I already mentioned. Fruits and vegetables produced all year long, which in many cases reflect the effort of local small and medium enterprises, enter yearly to the export markets.

Another trait I need to mention is that our countries´ economies are complementary. We do not compete, but rather, both benefit from the products of the other.

In the case of a California-based company, around US $25 billion of frozen broccoli is imported yearly to the United States.

As countries slowly start to recover from the pandemic, what is the economic impact of COVID-19 on businesses in Ecuador?

COVID has hit hard most of the Latin American countries. Ecuador has had a large number of contagions and deaths. Our main port city, Guayaquil, was particularly hit at the start of the pandemic.

After a first wave, with a large number of infected, dead and intensive care units (ICUs) topped and saturated, the efforts of the government, with quarantines and even lockdowns, etc. were partially effective. The death toll went down significantly.

This, however, severely affected the economy of the country, which even before the pandemic was already in a dire situation: a large public debt that had grown in previous years, a large deficit, increasing yearly debt payments due to large interest and capital payments, and high unemployment rates.

The government that had come into office in 2017 had been improving institutions and governance, and had focused on bringing up anticorruption practices and legal actions against individuals involved in previous corruption acts. Improvement was slow, but it was felt.

Although there is no good time for a phenomenon such as COVID, timing with Ecuador was bad. The help of the multilateral institutions and the agreement reached with the International Monetary Fund (IMF) were essential to palliate the crisis.

In April 2021, a new president was elected, bringing hope to Ecuador, with the promise of an open economy, free enterprise and attraction of investments, and much-needed creation of jobs.

The first task the president set to his government was the vaccination effort. After a very slow, struggling initiation by the outgoing president’s regime, the new government vowed to vaccinate 9 million Ecuadorians in the first 100 days of government — a huge task that involved international supply of vaccines, logistics at all levels, and general population positive response.

The task was a great success for the government and proved that private-public alliances can be very fruitful, since the government teamed with the private sector to accomplish the goal. A very auspicious result, that set world records, has been the outcome. As an example, the capital city of Quito (close to 3 million inhabitants) has 83% of its population already inoculated with both doses.

This government has promised to revitalize our country and to show the possibilities it presents to the international community and to investors; that is, a country that respects rule of law and will abide with international law and arbitration ruling, with strong institutions, and a “dollarized economy” (the U.S. dollar has been the official currency since 2000) which guarantees that a dollar invested remains as such and will not be subjected to devaluations.

Businesses are recovering and investments are picking up. There is a general sentiment of optimism, although challenges persist. It is important to maintain positivity and support the government’s efforts to continue to change laws to promote further business recovery and the creation of new jobs.