The California Chamber of Commerce Board of Directors has voted to support the Protect App-Based Drivers and Services Act, an initiative that is currently pending qualification for the November 2020 ballot.

The CalChamber supports the initiative because it allows companies in the gig economy that provide rideshare or delivery services to offer important benefits and protections to drivers without blurring the legal line between employee versus independent contractor status. This would allow gig economy companies to continue operating in California and provide workers with the opportunity to earn income along with the freedom to set their own schedules.

If passed, the measure would also apply retroactively, thereby addressing any liability that may have been incurred by a transportation and delivery network company (TDNC) arising from AB 5 (Gonzalez; D-San Diego), which went into effect on January 1, 2020.

The CalChamber believes supporting app-based drivers in the gig economy is critical to a diverse and robust economy. In light of the recent economic turmoil created by the COVID-19 pandemic crisis, it is more important than ever to do everything possible to position California for a robust comeback.

The Protect App-Based Drivers and Services Act would provide important clarifications for determining who is an independent contractor and eliminate costly and ongoing litigation against companies in the gig economy.

The act would deem drivers of app-based companies (which includes rideshare companies and delivery service companies) as independent contractors as long as:

a. The companies do not control the days, times, or number of hours the driver is logged onto the companies’ platforms;

b. The companies do not require the driver to accept any delivery or rideshare service;

The measure provides a number of benefits to app-based drivers, such as a minimum earnings guarantee of 120% of the applicable local or state minimum wage, as well as mileage reimbursement for all engaged time spent completing the rideshare request or delivery.

In addition to providing contractors with these benefits, the measure institutes a number of safeguards to protect contractors as well as the general public. For example, the measure:

• Requires network companies to institute zero tolerance policies for drug or alcohol use while driving; and

• Precludes app-based drivers from being logged on a network company’s platform for more than 12 hours in a 24-hour period.

Up until last year, the California Legislature had never addressed the appropriate standard for determining whether an individual is an independent contractor or an employee. Rather, the standard had been developed through case law, with S.G. Borello & Sons, Inc. v. Dept. of Industrial Relations (1989) 48 Cal.3d 341 as the main case on the issue.

The Borello decision set forth a flexible, multi-factor approach, primarily focusing on whether the hiring entity had a “right to control” the manner in which the worker performed the contracted service, along with eight other “secondary” factors, such as whether the worker was engaged in a distinct occupation or business, the skill required in the particular occupation, and whether the worker or the hiring entity supplied the tools used to perform the work and the place where the work was performed.

On April 30, 2018, the California Supreme Court made a surprising and unprecedented departure from the Borello test and announced its decision in Dynamex Operations West, Inc. v. Superior Court of Los Angeles, adopting the “ABC” test for determining whether an individual is an employee under the Industrial Welfare Commission Wage Orders.

Under the “ABC” test, a person is considered an independent contractor only if the hiring entity can prove all three of the following:

C. That the worker is customarily engaged in an independently established trade, occupation, or business of the same nature as the work performed.

In 2019, AB 5 was introduced in the Legislature, which sought to codify the Dynamex decision and the ABC test. AB 5 also expanded the application of the ABC test to the Labor Code and Unemployment Insurance Code, essentially making the ABC test the standard for all labor and employment-related issues.

AB 5 provided multiple exemptions for various industries and professions from the application of the ABC test, allowing those exempt professions to utilize the standard set forth in Borello. The gig economy, however, was one of the targeted industries of AB 5 and despite attempts from several labor unions and the Governor’s office to reach a deal on the issue, nothing was ever worked out.

Failure to properly classify an individual as an employee can subject a company to significant costs and penalties, including back wages, workers’ compensation coverage, unemployment insurance coverage, and unpaid taxes.

On May 5, 2020, the California Attorney General filed a lawsuit against Uber and Lyft, claiming the companies continue to misclassify their drivers as independent contractors in violation of AB 5. 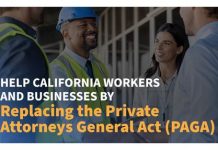 CalChamber Board Takes Positions on Initiatives Aiming for 2022 Ballot