California energy policy is a complex interaction of economics, technological challenges, and environmental considerations, all of which must work together to create a reliable and cost-effective system for delivering energy to millions of homes and businesses across California.

Those responsible for the energy grid must balance these considerations while accounting for a constant stream of electrons across the entire West—all of which is interconnected between and among the western states to form the Western Interconnection shown at below.

Every electron produced in California—whether renewable, nuclear, natural gas, or otherwise—must be carefully integrated into a complex series of wires, switches, and transformers before flowing into your home or business. All these maneuvers come together to ensure you can turn on the lights when you hit a switch, but also that your toaster doesn’t burst into flames.

Energy rates resulting from these decisions affect every California consumer, whether directly through your home energy bills or through increased prices of goods and services. Smart and planned integration of renewables into this complex system of interconnected electrons must be evaluated carefully and not reduced to tag lines.

• California Energy Grid Is Hybrid Federal and State System. All the electricity in the Western Interconnection is tied together and, by design, must operate at a constant frequency of 60 hertz (Hz). This complex series of interconnections is managed by a series of balancing authorities, the largest of which, the California Independent System Operator (CAISO), is located in California and encompasses part of California and Nevada. 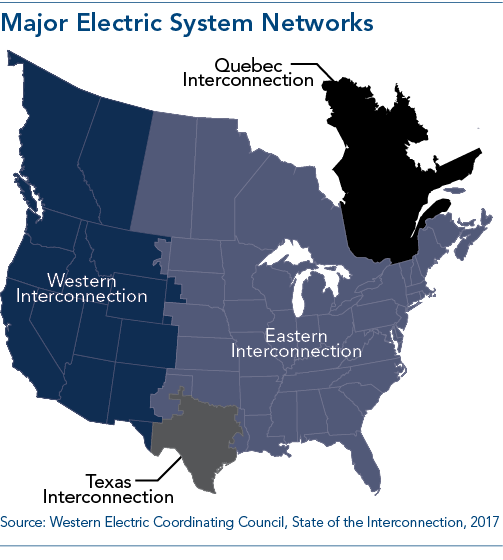 The legal authority to regulate the energy grid across the United States is split between the state and federal government. The federal government, through the Federal Energy Regulatory Commission (FERC) governs transmission of energy, as molecules of energy do not respect state boundaries and travel in interstate commerce, which the U.S. Constitution deems a federal issue. The states control decisions such as power plant siting, procurement, and in-state retail sales—the end use to homes and businesses. FERC retains governance over the CAISO and balancing authorities to the extent they transmit energy across power lines.

• Renewable Portfolio Standards and Integrated Resource Planning. While FERC governs transmission of energy, California retains jurisdiction to make decisions regarding wholly in-state production and retail sales of energy. California’s energy portfolio uses a mix of energy sources that allows use of California’s abundant natural resources when the wind is blowing and the sun is shining, but still allows for sufficient power to ensure that you can turn on your lights at night or charge your electric car when these natural resources are scarce.

To that end, natural gas, large hydroelectric plants, nuclear, and minor amounts of coal are still in the portfolio mix. The largest portion of renewables (approximately 70%) consists of solar. While solar is a vast resource during the daytime, it also can be an unpredictable and intermittent energy resource.

Over the last 17 years, the Legislature has fussed with the definition of renewable. In 2018, the Legislature passed SB 100 (de León; D-Los Angeles), which increased the goal from 60% to 100% by 2045. California’s utilities are currently on track to meet the increased RPS requirements.

• Peak Energy Usage Has Changed. As each new bill pushes the renewable energy threshold, regulators, utilities and ratepayers alike have to decide how to meet and pay for demand to maintain the complex grid described above. At peak sunlight, California produces too much energy and must curtail (shut down) production at solar and wind facilities. At the same time, California must ramp up its production at peak energy usage.

Over the years, as a result of many factors, including electrification of buildings, cars, and increases in population, California’s peak energy usage has shifted slightly later, after sunset. Therefore, solar cannot provide the power needed to meet peak demand. Fast-ramping, responsive resources must be available to meet this demand if Californians are going to continue to keep the lights on.

In 2019, the CAISO predicted a significant shortfall in reliability capacity at peak usage (when solar cannot help) starting in the summer of 2021. Historically, natural gas has been used to handle the shortfall and to keep the lights on, but these facilities have been closing in increasing numbers due to legislative and regulatory targets on fossil fuels. Solutions must keep sight of cost-effective mechanisms to meet short- and long-term reliability demands.

• Storage Technology Is Still in Its Infancy. Environmental groups have targeted natural gas plants in California, either by sponsoring legislation to ban all fossil fuel energy production, or banning new natural gas hookups in construction. Bills introduced each year attempt to ban natural gas power production, or limit new natural gas connections, increasing reliance on intermittent resources. Natural gas remains our go-to for reliability and peak usage because natural gas is cleaner burning than coal and is “fast-ramping,” meaning that we can easily turn up or turn down the volume as needed when renewables are not available to meet demand. Reliability depends upon flexible resources that can be summoned on demand.

Much interest surrounds development of storage solutions, with studies to evaluate batteries, pumped hydro or kinetic storage (where water or heavy objects are hoisted up a hill using cheap and abundant solar electricity during the day until peak demand, where gravity is holstered to create energy when the water or objects are allowed to move back downhill), conversion of hydrogen to natural gas, and other technology.

Storage solutions are discussed as if they are already in place, waiting to be utilized. The problem arises because this technology has not fully developed to the extent that it constitutes a significant portion of California’s energy mix. Batteries currently make up less than 1/10th of 1% of renewables in California.

California does not yet have energy storage at anything approaching the scale necessary to meet peak energy demand and still needs natural gas to keep the lights on. Even if planned energy storage projects are pursued, they take years to obtain proper permits, build and become operational. Relying too heavily on one technology over another caused this reliability shortfall.

• Rates Are High and Increasing. Every energy policy decision the state and federal government make has a direct impact on California ratepayers. Utility companies must comply with these mandates, and these costs are passed along to California ratepayers by the California Public Utilities Commission.

The U.S. Energy Information Administration, which conducts independent analysis of energy data, notes that California has the nation’s sixth highest retail price of electricity in the residential sector.

It often is touted that Californians use less in terms of kWh than residents in many states, which is true largely because of the shift toward electrification and end-user conservation efforts. However, California rates per kWh remain among the highest in the nation—even in states that similarly use little to no coal.

Legislation that continues to push the renewable threshold without consideration of grid capacity, pricing, or energy stability misses the whole picture. The California Chamber of Commerce supports legislative and regulatory solutions that bring new businesses to California and help employers and the state reduce greenhouse gas emissions in the most cost-effective, technologically feasible manner while allowing flexibility to ensure a stable energy future. California cannot achieve its stated goals as a leader on climate change if it cannot demonstrate a sustainable balance between renewable integration, grid reliability, and cost containment.