The California-Canada economic partnership, ongoing North American Free Trade Agreement (NAFTA) trade talks and what changes in the agreement could mean for agriculture in California were all discussed at a February 22 luncheon co-hosted by the California Chamber of Commerce.

With the support of the Consulates General of Canada of San Francisco and Los Angeles, and the California Farm Bureau Federation, experts convened at the Sutter Club in Sacramento for a thoughtful reflection and discussion.

Minister Lawrence MacAulay spoke first, saying he was delighted to be speaking with a group that understands the value of trade. MacAulay addressed three key areas vital to strengthening the relationship between Canada and the United States:

• Building on these common interests.

“No two countries depend on each other for their prosperity and security more than Canada and the United States of America,” Minister MacAulay said. “Today our ties are even stronger than ever. The relationship is highly strategic, important and highly beneficial to both of our great nations.”

Putting these statistics in perspective, Minister MacAulay said this amounts to more than $5 million in trade crossing the border while the group enjoyed lunch.

Minister MacAulay stressed that the United States, Canada and Mexico are becoming more integrated thanks to NAFTA. He used the example of a hamburger: the beef is raised in Alberta, the wheat for the bun is grown in the U.S. and the lettuce and tomato are from Mexico. “This kind of integration makes us more competitive in North America and around the world,” MacAulay said.

Speaking about NAFTA, Minister MacAulay said there is a continued mutual benefit for both countries. “The bottom line is, if we grow our trade together, our relationship and our economies will follow,” he said.

NAFTA has done so many things for all three countries over the last 25 years. “We have the largest economic area in the world,” Minister MacAulay exclaimed. “The most successful economic area, the most prosperous economic area.”

Although there are some areas of NAFTA that can be “tweaked,” all parties must be sure not to “break the wheel,” Minister MacAulay said.

“Our job is clear,” Minister MacAulay said in closing, “trade can and should continue to be an instrument of growth and prosperity for our two nations. When innovators on both sides of the border are free to produce and sell their products to each other and customers around the world, everyone wins.”

California Department of Food and Agriculture Secretary Karen Ross followed Minister MacAulay, praising everything he said and took a California-centric view of what trade means and how it acts as a bridge.

Secretary Ross lauded NAFTA for everything it has brought to its participants.

“The most successful winners of trade, when we think about agriculture and all the goods that we share around the world, are the consumers and the voters,” she said.

In closing, Secretary Ross said that agriculture is not a legacy or historic part of either country, “it is a vibrant, dynamic, critical element to all that is good and prosperous in our future.”

Both groups reiterated their support for NAFTA and emphasized the importance of integrated supply chains across the continent.

The trading relationship between California and Canada remains strong with $6.3 billion USD in agricultural trade in 2016, including $4.1 billion worth of California agricultural exports to Canada.

“The fresh produce industry is committed to achieving a win-win-win agreement for all three NAFTA countries,” said Proctor. “NAFTA has enabled the free flow of goods across our borders with over $2.5 billion USD worth of fresh produce exported from California to Canada in 2016 and ensures that Canadians have a year-round supply of fresh and affordable produce. We appreciate the strong support shown by Minister Lawrence MacAulay and Canadian negotiators for our industry and all of Canadian agriculture during these negotiations.”

CFBF President Johansson said, “California agricultural exports support 1 million jobs on farms and in cities, and that number will only increase with higher demand for California-grown products. Trade with Canada and Mexico under NAFTA has generally been positive for California farms, ranches and agricultural businesses. We support ongoing efforts to modernize the agreement for the benefit of farmers, food businesses and consumers in all three nations.”

Both groups pledged to continue working with NAFTA negotiators and legislators on both sides of the border to ensure a successful and reciprocal agreement for industry.

At the Friends of Canada reception held in Sacramento at the Leland Stanford Mansion on Wednesday evening, February 21, Kevin Howlett, senior vice president, government relations and regional markets at Air Canada, commented that the airline is significantly involved in the California market.

With year-round service to four cities in the state including Los Angeles, San Francisco, San Diego and San Jose, the relationship between Air Canada and California is deep.

He also announced that Air Canada will launch two new routes in May: San Francisco to Edmonton and Sacramento to Vancouver.

The CalChamber actively supported the creation of the NAFTA among the United States, Canada and Mexico, comprising 486.9 million people with combined annual trade with the United States being around $1.139 trillion in 2017. In 2017, goods exports totaled over $525.46 billion while goods imports totaled nearly $614.02 billion.

The CalChamber’s long-standing support for NAFTA is based upon an assessment that it serves the employment, trading and environmental interests of California and the United States, as well as Canada and Mexico, and is beneficial to the business community and society as a whole. Since 1993, trade among the three NAFTA countries has nearly quadrupled.

The CalChamber understands that NAFTA was negotiated more than 25 years ago, and, while our economy and businesses have changed considerably over that period, NAFTA has not. We agree with the premise that the United States should seek to support higher-paying jobs in the United States and to grow the U.S. economy by improving U.S. opportunities under NAFTA.

The provisions of the NAFTA with Canada and Mexico have been beneficial for American industries, agricultural enterprises, farmers, ranchers, energy companies and automakers. Any renegotiation of NAFTA must recognize the gains achieved and ensure that U.S. trade with Canada and Mexico remains strong and without interruption.

Now that the renegotiation process is underway, the CalChamber urges a quick and efficient process, and one that does not hinder ongoing trade and investment among the three NAFTA members, who must be kept united in the same end-goal of a successful renegotiation 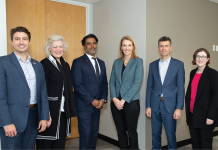