For the third time since 2012, California’s lawsuit climate ranked No. 47 out of 50 in the national survey by the U.S. Chamber Institute for Legal Reform.

California has been in the bottom 10 states since the survey began in 2002. In addition, both Los Angeles and San Francisco made the list of cities or counties with the least fair and reasonable litigation environment.

This perception of California’s poor litigation climate is critical—an all-time high 85% of survey participants said that a state’s lawsuit environment is likely to have an impact on their company’s decisions about where to locate or expand.

California is in the bottom seven of 10 elements evaluated in the survey. The state ranked dead last for its overall treatment of tort and contract litigation, 49th for the quality of its appeals process and 48th for its treatment of class action lawsuits and the fairness of its juries. 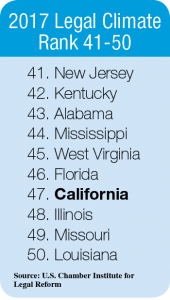 California is also home to one of the worst lawsuit jurisdictions in the nation: Los Angeles, which ranked second among the cities or counties with the worst legal environments.

Additionally, since 2008, California’s state court system has been in a perpetual budget crisis resulting in the closure of at least 52 courthouses and more than 200 courtrooms, as well as reducing services statewide. This has clogged the courts, and the state Supreme Court’s Chief Justice has estimated it has deprived more than two million Californians of accessible justice.

Harris Poll, a global polling firm, conducted the 2017 Lawsuit Climate Survey through more than 1,300 telephone and online interviews between March 31 and June 26, 2017. Participants were senior business lawyers and executives in companies with annual revenues of at least $100 million. The survey asked participants to rank the fairness of state lawsuit environments across 10 categories, including their laws, courts, judges, and juries.

A coalition of businesses led by the California Chamber of Commerce filed a lawsuit on December 6 to stop a new California law that precludes employers from enforcing arbitration agreements made as a condition...

Governor Gavin Newson finished signing/vetoing all bills on October 13. The California Chamber of Commerce was tracking 62 bills on his desk, 32 supported and 30 opposed. So how did we do? Out of the...