Back by popular demand, Dan Walters will be a featured speaker at the California Chamber of Commerce 2017 Capitol Summit on May 31 in Sacramento.

The half-day summit will feature political insiders and CalChamber policy advocates who will address national campaigns and state policy issues.

Following the Capitol Summit, attendees are invited to the Sacramento Host Reception, an event co-sponsored by the CalChamber and the Sacramento Host Committee to provide networking opportunities for business leaders from all industries in California to discuss key issues facing the state.

Traditionally, the Governor of California and the chair of the CalChamber Board of Directors speak on issues facing employers in California at the Host Breakfast. Leaders from business, agriculture, the administration, education, the military and legislators from throughout the state are invited to join the discussion. 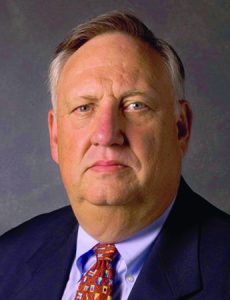 In 1981, Walters began writing the state’s only daily newspaper column devoted to California political, economic, and social events, and in 1984, he and the column moved to The Sacramento Bee.

Walters has written about California and its politics in numerous publications and is a frequent guest on national television news shows, commenting on California politics. He is the author of The New California: Facing the 21st Century, the founding editor of the California Political Almanac, co-author of The Third House: Lobbyists, Money and Power in Sacramento, and contributed chapters to two other books, Remaking California and The New Political Geography of California.

May 19 is the deadline to register for the Capitol Summit, Sacramento Host Reception and Breakfast. The cost is $65. Space is limited.

For more information or to register, visit www.calchamber.com/2017summit-host.

California Lieutenant Governor Eleni Kounalakis and California Chamber of Commerce Board Chair Kailesh Karavadra shared their perspectives on the state’s accomplishments and challenges at the 96th Annual Sacramento Host Breakfast on June 2. The annual...