California Drops to No. 2 Ranking Among ‘Judicial Hellholes’ in Nation 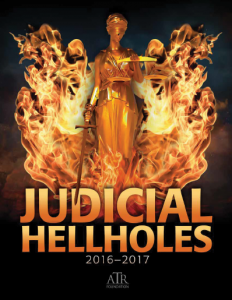 California has once again been identified as one of the nation’s top “Judicial Hellholes,” according to the latest ranking of the “most unfair” civil litigation courts by the American Tort Reform Foundation (ATRF).

The report, available to download at www.judicialhellholes.org, cites the latest data available from the Court Statistics Project of the National Center for State Courts, showing that more than a million new lawsuits are being filed annually in California’s state courts alone. Tens of thousands more are filed in federal courts here.

According to the report, California is the epicenter for lawyers trolling to bring disability access lawsuits against small businesses and class action lawsuits against food and beverage companies.

Sitting Down on the Job

California’s high court in April 2016 unanimously ruled that state law entitles employees to sit in a chair at work on a task-by-task and location-by-location basis. Employers found in violation are liable for civil penalties to each employee for each separate instance.

Food and beverage makers and sellers frequently are the target of no-injury fraud and false advertising class action lawsuits in California state and federal courts. The federal Northern District of California has been referred to as the “Food Court” as cases pile up there.

Few lawsuits are thrown out and many drag on for years, allowing plaintiffs to amend their grievances and re-tool their arguments. Because many of these food and beverage lawsuits eventually show up in court records as “voluntarily dismissed,” it’s likely that parties often come to a private settlement with the amount of money changing hands virtually unknown.

Becoming law as a voter-passed referendum in 1986, Proposition 65 requires businesses to post warning signs where even trace amounts of some 800 chemicals may be present. The signs have been an invitation for personal injury lawyers to bring numerous lawsuits, with Proposition 65 claims producing hundreds of settlements each year.

According to the state Department of Fish and Wildlife, the California Environmental Quality Act (CEQA) “is California’s broadest environmental law,” helping to “guide the Department during issuance of permits and approval of projects.”

Despite CEQA’s well-intentioned purpose, it has had many unintended consequences. For years, CEQA has been used increasingly as a tool to challenge, block or delay construction projects across the state. Concerned with protecting their own property values rather than the environment, wealthy plaintiffs level these lawsuits, which are a significant factor in the state’s shortage of affordable housing, the Judicial Hellholes report states.

A December 2016 decision by the California Supreme Court found that “the duty of employers and premises owners to exercise ordinary care in their use of asbestos includes preventing exposure to asbestos carried by the bodies and clothing of on-site workers” where it is “reasonably foreseeable” that workers “will act as vectors carrying asbestos from the premises to household members.”

ADA lawsuits in California continue to surge. Brought under both the federal Americans with Disabilities Act (ADA) and state civil rights law allowing for damages and attorney fees, these claims are especially damaging for small business owners— particularly minorities and recent immigrants who are unable or unwilling to fight back.

Plaintiffs rarely seek renovations and actual access to an allegedly ADA-noncompliant restaurant, convenience store, nail salon or auto garage. “They just want to get paid and are happy to settle out of court,” the Judicial Hellholes report comments, regardless of whether the ramp’s angle is adjusted by a few degrees or the men’s room sink is ever lowered by an inch-and-a-half.

Based on the pretense that employees are bringing these claims on behalf of the state, 75% of the penalties from noncompliant employers goes to the state’s Labor and Workforce Development Agency while only 25% goes to “aggrieved employees.”

A coalition of businesses led by the California Chamber of Commerce filed a lawsuit on December 6 to stop a new California law that precludes employers from enforcing arbitration agreements made as a condition...

Governor Gavin Newson finished signing/vetoing all bills on October 13. The California Chamber of Commerce was tracking 62 bills on his desk, 32 supported and 30 opposed. So how did we do? Out of the...