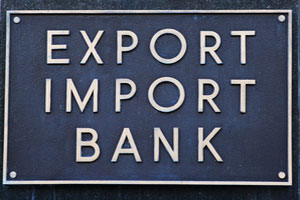 A recent report to Congress shows that 2015 was an especially challenging year for the U.S. Export-Import (Ex-Im) Bank.

Since June 30, 2015, the Export-Import Bank has been closed for transactions greater than $10 million. Although an overwhelming majority in Congress voted to fully reauthorize the bank in December 2015, the chairman of the Senate Banking Committee (Senator Richard Shelby, R-Alabama) has stymied the bank’s full restoration by blocking action on a nominee required to achieve a quorum for the Ex-Im Bank Board. In the absence of a quorum, the bank cannot approve transactions of more than $10 million.

In late 2015, U.S. President Barack Obama signed the California Chamber of Commerce-supported bipartisan legislation to resurrect the Export-Import Bank. This action will extend the bank’s charter by five years until 2019.

According to The Competitiveness Report of EXIM, the lapse in authority from June 30, 2015 to December 4, 2015 reduced the competitiveness of Ex-Im and the exporters and workers who depend on its financial services.

The 50% drop in authorizations represents numerous lost opportunities for U.S. businesses and their workers. The bank’s inability to approve transactions exceeding $10 million extends the profound impact of the lapse on larger exporters, the thousands of smaller companies that supply them, and the hundreds of thousands of workers whose jobs depend on exports.

Despite this lapse, Ex-Im has continued to support American job growth to the best of its ability, equipping U.S. businesses to create or maintain 109,000 jobs while generating a surplus of more than $430 million for U.S. taxpayers over the last year. Still, these successes compare unfavorably with 2014, when a fully functioning Ex-Im was able to support 164,000 jobs and transfer $675 million to the Treasury Department.

The report found that effects on U.S. businesses and workers from a lack of domestic political support for Ex-Im are exacerbated by the extraordinary steps other countries are taking to support their own exporters and national interests. Export credit agencies (ECAs) abroad expanded product offerings allowing exporters to compete more aggressively, and more countries opened new ECAs of their own.

The Ex-Im Bank Advisory Committee worries that U.S. exporters will be left behind, as Ex-Im remains constrained in an environment where new export credit products are being developed at an alarming rate in other parts of the world.

The impact of decreased Ex-Im competitiveness on the small businesses that power communities and jobs across the United States is especially worrisome, according to the advisory committee. For small and medium-sized enterprises, Ex-Im’s uncertainty over the past year has been particularly damaging, the report found.

Specifically, these smaller exporters are now fighting competitors backed by strong ECAs, and many had to reduce or eliminate their export business without Ex-Im financing. There are medium- and long-run scarring effects because it is not just a single transaction at stake, but the business relationship, as well as maintenance contracts, which are major employment generators. Larger investment banks do not offer the kinds of financing tools that small business exporters need to compete.

According to the report, small and medium-sized exporters experienced some of the most severe impacts of the lapse due to the sudden expiration of the Ex-Im products upon which those exporters rely. More than 800 multi-buyer export credit insurance policies—the vast majority of which were held by U.S. small businesses—expired during the lapse. To associate a dollar value with this impact, in the prior fiscal year (2014), Ex-Im equipped these same businesses with more than $580 million of insurance.

Looking to the future, the Ex-Im Advisory Committee recommends that Ex-Im track the supply chains of exporters across the country in pursuit of a fuller picture of the impact of Ex-Im financing on small and medium-sized suppliers.

With the domestic and global supply chains ever-expanding and changing, it is critical to the Ex-Im competitiveness and evaluation that the agency and its stakeholders understand the impact and role of its financing beyond its direct customers, the report states.

The Ex-Im Advisory Committee applauds the Ex-Im’s work this year to increase transparency by developing an online platform to facilitate more efficient and complete communications with stakeholders. The committee further encourages Ex-Im to continue its effort to have regular meetings with environmental advocates in the interest of expanded dialogue, partnership, and action.

The Ex-Im Advisory Committee also applauds the Ex-Im’s work to implement electronic filing and a broader embrace of technology to better serve its customers.