“The basic principle we’ve been approaching the recent budget on is that we are not solely focused on the upcoming year; we are really looking to the long term and thinking about how to manage the state’s finances, not just for this generation, but for future generations as well,” Cohen told attendees at the January 12 luncheon.

Cohen was quick to remind attendees that although revenues are up, “even when we’ve had surpluses, they’ve been two things: one: they’ve been very short-lived, and two: the magnitude of them doesn’t compare to the size of the budget deficits that we’ve faced.”

Capital gains are at an all-time high, Cohen explained, going on to show a chart illustrating that the last two times capital gains have been this high, they have come crashing down shortly thereafter.

Cohen said that unlike prior budgets in California, the 2016–17 budget will be focused on preparing California for the next recession.

“We don’t exactly know how strong of a recession it will be, but we know it’s coming—that’s the nature of the business cycle,” Cohen said.

Builds Up the Rainy Day Fund

The Governor’s budget makes a supplemental deposit of $2 billion into the state’s rainy day fund—boosting the balance from 37% today to 65% of its constitutional target.

News reports last week stated that General Fund spending is projected to rise by more than $9 billion over the last two years, but actual spending is held in check. Thanks to the CalChamber-supported budget reform measure, Proposition 2, the Governor proposes boosting the state’s rainy day reserve and paying down another $1.5 billion in budget debt.

“Setting aside 10% of revenues for the rainy day fund is now our goal and basically we are trying to get to that goal as quickly as we can so that we have a full rainy day fund when the next recession does start, whenever that may be,” said Cohen.

Cohen discussed the Governor’s transportation package, first outlined last summer, that would provide $36 billion over the next decade to improve the maintenance of highways and roads, expand public transit, and improve critical trade routes.

The new budget re-ups this proposal, and adds another $800 million in additional loan repayments to support a variety of transportation projects.

Asked to commit more General Fund dollars for transportation, Cohen said it is the same story that it has been in the past.

“We’ve had a couple periods of time when we put a lot of money from the General Fund into transportation. When there have been budget shortfalls, that money has never lasted,” Cohen said. “So the chance of a long-term commitment from the General Fund, I think is remote and I think we do need a long commitment. We have a perpetual gap in the amount of revenues we have to maintain our highways and roads and the amount that we bring in.”

He explained: “This is an opportunity basically, for the state to try to catch up on all of those things that we should have been spending on over the past few decades.” 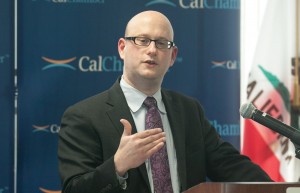 The budget boosts school spending per student to $10,591 in 2016–17, an increase of nearly $3,600 compared to 2011–12 levels. It provides a fourth-year investment of more than $2.8 billion in the Local Control Funding Formula, which Cohen explained, focuses on students with the greatest challenges to success, bringing the formula to 95% implementation. The budget also proposes a $1.6 billion early education block grant that combines three existing programs to promote local flexibility, focusing on disadvantaged students and improved accountability.

Cohen explained that this block grant will “give school districts more flexibility and focusing the dollars on those low-income students. We think that’s the best way to use limited early education dollars.”

“We are really focusing on the labor demands and how do community colleges offer the right programs to get students into the workforce,” Cohen said.

Cohen explained that the managed care organization (MCO) tax is set to expire at the end of the current year. This change in federal policy has undermined the ability to obtain matching federal funds for a tax assessed on managed care organizations that serve Medi-Cal beneficiaries. The first year that California is going to be sharing the cost for the optional expansion with the federal government is 2017. Up to now, the federal government has covered 100% of the cost of the expanded population to Medi-Cal.

Under the federal health care reform optional expansion, 3.4 million additional residents now receive health coverage and the budget allocates $740 million from the General Fund for the state’s share of costs. These costs will grow to reach $1.8 billion General Fund by 2020–21.

A proposal to update the tax failed last year since it would have sharply increased taxes on health plans that do not serve Medi-Cal enrollees. Cohen noted that when this proposal was introduced, the CalChamber raised some concerns. “It’s a great example of the organization’s role in how you can really push for change in a positive way . . . it forced us to go back to the drawing board, think more creatively about all of the taxes managed care organizations pay: How can we, sort of, fit within the federal parameters, but also continue that critical General Fund help the managed care organization tax provides.”

In a statement on January 7, following the release of the Governor’s proposed budget, the CalChamber applauded the Governor for finding a way to avoid a reduction in federal Medi-Cal matching funds without adding costs to health plans that would have increased premiums to responsible California employers.

“Although we need to review the final language,” said Zaremberg, “we should all be supportive of an approach that addresses a funding shortfall that doesn’t add to employer health care costs.”

A final summary of his talk, Cohen said, would be “that capital gains are at the highest level they were in 2015, that we are seven years into the economic recovery, that we think fiscal restraint is the order of the day, and I think that’s what this budget reflects.”

The full summary of the Governor’s budget proposal can be found at www.ebudget.ca.gov.

The strong economic performance by key California industry sectors and entrepreneurs was reflected last week in the upward revision of the state’s general revenues in Governor Gavin Newsom’s May budget plan. The increase — $55...

Governor Gavin Newsom announced a plan on May 12 to boost spending on California public schools by $20 billion, including creating universal pre-kindergarten and college savings accounts for children from low-income homes. Described by the...