A recently amended “job killer,” SCA 5 (Hancock; D-Berkeley)/Mitchell; D-Los Angeles), now seeks to undermine the protections of Proposition 13 by unfairly targeting commercial and industrial property owners and increasing their property taxes by assessing their property based upon current fair market value instead of acquired value.

In the latest Capitol Report video, CalChamber Policy Advocate Jennifer Barrera explains that the California Chamber of Commerce is opposed because the bill “is unfair and will impose a discriminatory tax against commercial and industrial property owners that will ultimately harm small businesses with higher rent, consumers with higher prices and workers through potential job loss.”

Before the June 9 amendments, SCA 5 would have lowered the vote threshold for adopting tax increases from two-thirds to 55%.

Voters passed Proposition 13 with more than 64% of the vote in 1978 and put an end to continually increasing property taxes. Proposition 13 set a uniform 1% property tax rate, established property valuation at its acquisition value and limited yearly increases in assessed value to no more than 2%, providing certainty and predictability to government, homeowners and business owners.

Voters have been faced with split roll ballot initiatives twice in California’s history (Proposition 8 in June 1978 and Proposition 167 in November 1992) and rejected them both times.

In recognition of the significant tax increase this would be for such property owners, SCA 5 proposes a phase-in schedule for payment of this tax with all commercial and industrial property being assessed upon its current fair market value by 2019–2020. Property owners saddled with this huge tax increase would be provided with two to three years to pay the taxes.

Additionally, property owners who are unfortunate enough to have a 25% increase in the current fair market value of their property compared to the prior assessed value will be exempt from paying those taxes until after five years, at which point the property owner will be liable for all taxes assessed.

Any higher taxes imposed on the owners of commercial and industrial property will likely be passed on to the small business tenants of such property through higher rent. Notably, SCA 5 excludes renters of residential property from its application, presumably due to concern that higher property taxes on apartment complexes will be passed on to tenants.

SCA 5, however, does not provide this same protection for tenants of commercial property who will also likely suffer from significant increases to their rent as a result of higher property taxes on the property owner.

Such increased costs on commercial and industrial property owners and small businesses will also manifest as higher prices for consumers and/or cost saving measures, such as reductions in the workforce or employee benefits. A March 2012 report from Pepperdine University, “An Analysis of Split Roll Property Tax Issues and Impacts,” evaluated the impact on property owners for a proposal similar to SCA 5, with regard to assessing property on the current fair market value versus the acquisition value.

The report warned that businesses strapped with a multibillion-dollar tax increase would not be able to absorb the entire cost and would have to adjust accordingly through increased prices and rent, as well as a reduction in costs, including labor. Within the first five years, the report estimated, a tax increase of approximately $6 billion would create a loss of more than 390,000 jobs, with an additional loss exceeding 100,000 in each year thereafter. This impact would be even larger with a higher tax increase.

California currently has a budget surplus of more than $2 billion. This surplus is in addition to the $4.2 billion budget reserve.

“We believe the protections afforded under Proposition 13 to property owners should be maintained,” Barrera says in the video. “Now is not the time to increase taxes in California when the state budget has over a two billion dollar surplus.”

With such a significant surplus, it is questionable as to why California needs to impose such a discriminatory and unfair targeted tax against commercial and industrial property owners that will create higher prices, rent, and job loss.

SCA 5 has been assigned to the Senate Governance and Finance Committee; no hearing date has been set. 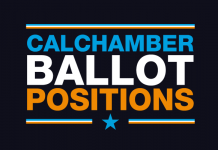